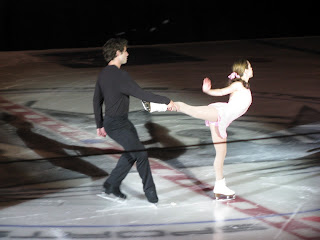 Sorry it's taken me a few days to write up my thoughts on An Evening On Ice! I spent the last few days exploring the Los Angeles area, catching up with friends and enjoying the beautiful weather. One of my favorite parts of the trip was the Warner Bros. Studio Tour I took on Tuesday morning. I've included a little summary and my photos from the tour below, but first a quick report on the show!

Braden Overett acted as the emcee of the show, and he has such a fun personality that he's perfect as a host. Between skaters, Richard Dornbush also provided some entertainment, reminding me of when Kurt Browning clowned around on Stars On Ice one year between the numbers. Ricky was dressed as a nerd, and he stayed in character for his program to "Let's Get It On" and "Staying Alive," which was hilarious. And his jumps looked great! He even threw in a triple axel. 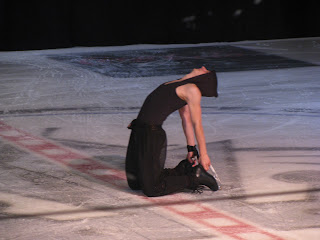 Grant Hochstein was one of the first skaters, and his performance to "Collide" was a great showcase for his lyrical style. His skating is as smooth as ever. Alex Johnson skated to a very unique piece of music that was a different look for him. He has better spirals than many female skaters!

Chelsea Liu/Devin Perini did their short program to "Dueling Banjos," and they had a very impressive lift with multiple position changes. Alexe Gilles skated to "Will You Still Love Me Tomorrow" and she was a beautiful presence on the ice. Her jumps looked solid, too! It was so great to see Courtney Hicks back after her injury. She skated to a really pretty song (wish I knew the name!). Leah Kaiser skated to Adele's version of "To Make You Feel My Love" and showed off some nice jumps and a lot of joy in her skating. 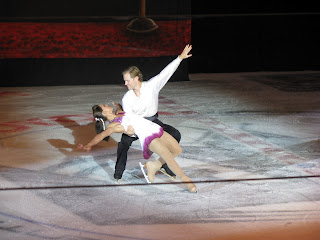 Tiffany Vise/Don Baldwin skated to "Come What May" and did some cool pair tricks. Derrick Delmore showed he's still a great jumper as he skated to "Apologize" with really good attack and speed. He was also sporting a cool mohawk. Nick Laroche, one of the founders of the US Athletic Foundation, used to be a mainstay at Nationals, and I always enjoy seeing him skate again!

Sean Rabbitt had the crowd with him from his first step, and he gave one of the most memorable performances of the afternoon with his self-choreographed program to Cabaret. The new team of Lindsay Davis/Mark Ladwig skated to "Too Afraid To Love You" by The Black Keys, and I was impressed by the crazy entrance to their lift. They appear to be meshing well as a pair. Beatrisa Liang was another mainstay at Nationals that I was happy to see once again. She skated a fun program to "The Way I Am."

Doug Razzano had a few problems on his jumps, but he had solid skating in between as he skated to "I Love  the Way You Lie" by Colton Dixon (loved this rendition!). I was a huge fan of Kimmie Meissner when she skated competitively, and I'm so glad she's continuing to do shows! She looked beautiful and happy on the ice. 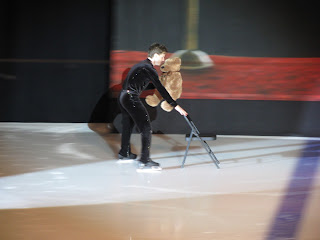 Braden is one of my favorite skaters, and he treated us to a half lyrical/half comedic performance that was made of awesome. He's such a great performer. Mary Beth Marley/Rockne Brubaker have definitely grown together as a pair, and Mary Beth looks more mature this season. I like the new low ponytail style she's sporting. They have a nice soft, romantic style, which was showcased in their program to Louis Armstrong tunes.

Adam Rippon was barely recognizable without his signature curly hair, and he debuted a new style of program for him with upbeat dance music. Joannie Rochette closed the show to a Christina Aguilera song, and she had great charisma and audience connection.

I hope the US Athletic Foundation will continue to put on the show year after year! It's a great event to benefit a great cause, and it's also an excuse for me to annually visit L.A. :)

On Tuesday morning, I did the Warner Bros. Studio Tour in Burbank, and it was such a cool experience! I highly recommend it if you visit L.A. Fans of Friends, The Big Bang Theory, the Harry Potter movies and Pretty Little Liars will especially enjoy it. We were able to sit in the sound stage where they film The Big Bang Theory and see some of the sets (the hallway with the broken elevator and Leonard and Sheldon's apartment). We couldn't take photos in the sound stage, unfortunately. The sets looked so small compared to what you see on TV! 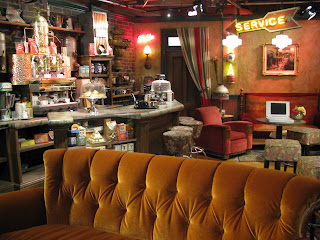 The tour guide also took us to the Central Perk set from Friends. It was relocated from one of the sound stages to the prop warehouse. They did allow us to take photos there!

Some of the outdoor sets we saw from Pretty Little Liars were Rosewood High, Jason and Allison's house, Toby and Jenna's house, and Emily's house (see photos of these in my album below!) In the museum, which was part of the tour, the masquerade ball costumes from PLL were on display - Melissa's Black Swan costume, Aria's and Spencer's dresses, and Lucas's creepy costume with the white mask. It was so cool seeing them up close. No photos were allowed in the museum :(

The museum also held tons of costumes from other TV shows and movies, and the entire second floor held props and costumes from the Harry Potter movies. There was a dummy of Hermione that looked so much like Emma Watson that I couldn't stop staring at it. It was really remarkable. 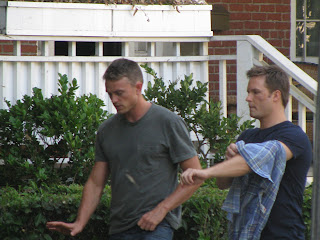 While we were touring a house that's used in the TV show Hart of Dixie, two of the actors from the show, Wilson Bethel (who plays Wade) and Scott Porter (who plays George), were practicing a fight sequence on the lawn next door. I couldn't believe my luck in seeing two actors from one of my favorite shows! I'll always call Scott Porter "Jason Street" because of my love of Friday Night Lights. We weren't allowed to accost the actors, but I did snap a bunch of photos of them :)

Here are all the photos I took on the tour: