An Evening on Ice 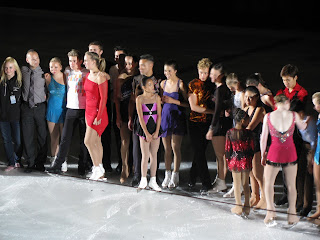 I attended the third annual An Evening on Ice show this weekend in L.A. and wrote up a quick report on the action! I also took a few videos. Nick and Tricia Laroche always do a wonderful job with this show, which benefits the US Athletic Foundation. My report is after the videos:


The show began with a jazzy performance by Dyllan McIntee, Juvenile Girls Champion. I hadn't seen her skate before and I was impressed! Team Fusion, a synchro team, was next and they did a cute program with a Little Red Riding Hood theme that started with "She Wolf" by Shakira. Alexe Gilles followed and had some trouble on the jumps, singling all of them. Leah Keiser skated to "Stay" by Rihanna and looked really lovely! Douglas Razzano lightened the mood next, skating to "Don't Stop the Party" by Pitbull. I think he needed to let go just a bit more with the energetic music and really go to town with it. After Doug was Bebe Liang, and I was super excited that she skated to one of my favorite Alicia Keys songs, "Un-thinkable." She still has great presence on the ice. Vincent Zhou skated to what sounded like a Broadway number. His jumps were as impressive as always! Next was one of the highlights for me -Jonathan Cassar. He always entrances the crowd when he skates. Such beautiful movement and emotion. He is a true dancer on the ice. Tyler Pierce followed Jon and did a really sweet number to "I Wanna Hold Your Hand." The lone pair in the show, Chelsea Liu and Devin Perini, performed their short program and looked ready to compete. Their lift was very impressive. Closing out the first half of the show was Adam Rippon, and he was another of my highlights. He skated to Elliot Yemin's "A Song For You" and his skating looked so powerful and fast. We got to see a gorgeous Rippon Lutz, too!

Starr Andrews started off the second half of the show. I'd never heard of her, but I'm sure I'll be hearing more about her in the future! Her spins were awesome and so was her stage presence. Rachael Flatt was next, and her program to "Clair de Lune" might be the best program I've ever seen from her. From the layout it appeared to be her short program. She really felt the music and had some beautiful moments. I wish I would've recorded it! Derrick Delmore was another skater I wish I would've captured on video. He skated to "When I Was Your Man" by Bruno Mars, and he did some huge jumps and was flying across the ice. Next was Emily Hughes who skated to "Hallelujah." She looked like she enjoyed every second of the program. Polina Edmunds followed with a cute program that sampled a variety of music from show tunes to Michael Jackson. After her was Shotaro Omori. His Latin program was perhaps his new short? Courtney Hicks had some problems with her triple jumps, but she exhibited powerful skating between the jumps. Next was Kimmie Meissner, who I always love seeing on the ice. She skated to "In Your Eyes" and did a triple jump, which I hadn't seen her do in a show in quite awhile. Joshua Farris was supposed to follow Kimmie, but he couldn't skate because of illness. I was so bummed because he was one of the skaters I most wanted to see. The final skater was Alissa Czisny, and she skated to music from the soundtrack of The Notebook - beautiful music that I wish more skaters would use! Her performance was so gentle and flowing and lovely.