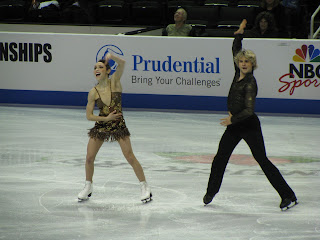 I apologize again for not being able to timely post photos and reports. I'll start the catch-up with all the Friday events. My day kicked off with a trip to the HP Pavillion for one group of pairs practice, where I saw Marissa Castelli/Simon Shnapir almost land a clean throw triple axel.

After cheering on Marissa and Simon, my friends and I took a quick lunch break before returning to the arena for the short dance warm-up. There were a few near collisions with so many teams on the ice in each of the groups. The most memorable happening from the warm-up was the debut of Meryl Davis's and Maia Shibutani's new dresses. 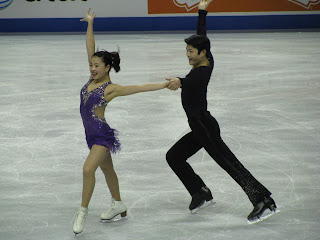 Following a brief break, the short dance commenced. It promised to be a great competition, and the skaters delivered. Only a few points separated third and tenth place. In second place were Maia and Alex Shibutani, who showed they'd been working hard since the Grand Prix Final. Their short dance was almost totally revamped, and the changes sparkled. Also sparkling were Meryl Davis and Charlie White. Their short dance just gets more and more fun with each performance. The new ending surprised us, and I need to see it again because I wasn't ready for it! 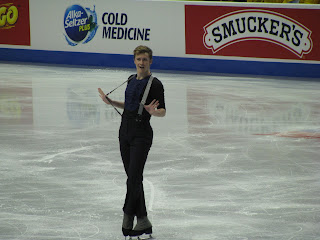 With a delicious dinner at Amici's behind us, my friends and I headed back to the arena for the men's short program. There were a few surprises in the event - Armin Mahbanoozadeh skating clean after a rough season, Richard Dornbush not completing any jumps up to par, and Joshua Farris also having multiple jump issues. Adam Rippon finally exorcised his short program demons and skated a lively performance that put him in second place. The man of the night was Jeremy Abbott, who flew across the ice with amazing intricate footwork in his swing program.

Here are my photos from all the Friday practices and events: