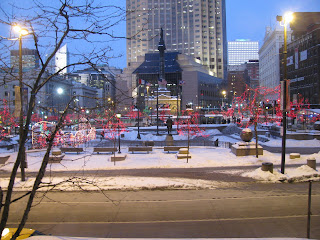 2009 Nationals in Cleveland gave us another great setup with the host hotel connected to the Quicken Loans Arena through a mall. I literally did not step outside for four days. Everything I needed was contained within the complex. Even the McDonald's in the food court was open before dawn when I needed breakfast-to-go for the 6:00am dance practice. 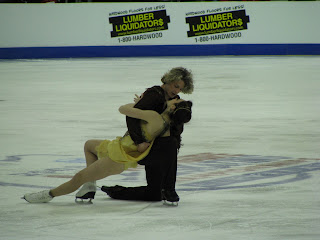 Ah, yes, 6:00am practice. I woke up before the sun to see Meryl Davis and Charlie White practice their Samson & Delilah free dance, and they didn't show. Lesson learned - verify who will be attending pre-dawn practices before making plans!

With Tanith Belbin and Ben Agosto out of the competition due to injury, Meryl and Charlie took center stage and skated like champions. My heart was in my throat during their original dance, thinking about their disastrous OD at Cup of Russia a few months prior, but they put on a show and cruised through it with no problems. In junior dance, Madison Chock and Greg Zuerlein also proved worthy of the champion title, skating their Phantom of the Opera free dance beautifully. 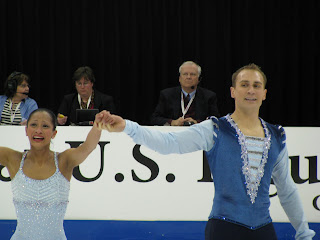 There was a big surprise in the pairs event when the new team of Caydee Denney and Jeremy Barrett beat defending champs Keauna McLaughlin and Rockne Brubaker in the short program. Some thought they should've won the free skate, also. The most magical free skate, though, was Amanda Evora and Mark Ladwig's. As they got deeper into the program and had completed almost all their elements successfully, Amanda started crying. Her tears were evident as she soared in the air on their final lift. I was one of many people in the audience dabbing at their eyes at the end of the program. 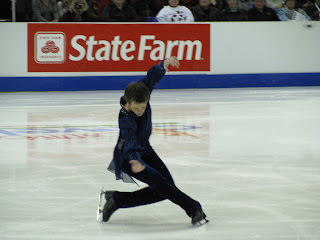 The men's competition saw another new face on the podium. Brandon Mroz skated for the first time on the senior level at Nationals but performed like a veteran. In a shocking result, he finished ahead of Evan Lysacek and nabbed the silver medal. Jeremy Abbott was sublime in the short program and rode the wave to his first national title. The men's short program event that year was outstanding overall. A special moment was Parker Pennington skating perfectly in his training town. The crowd went nuts after his performance.

Next in the series is Spokane 2010, my most memorable Nationals - dinner with Meryl Davis and Charlie White, breakfast with Maia and Alex Shibutani, adventures in the Safari Bar, and shedding tears for Tanith Belbin and Ben Agosto's final Nationals skate.
Posted by Jennifer at 10:49 PM