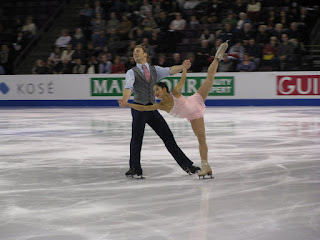 My weekend at the Four Continents competition in Colorado Springs was a whirlwind trip! I arrived very late Friday night and started the event early Saturday morning with ice dance practice at World Arena. All the dancers looked relaxed and ready to go. Between the run-throughs, we were treated to Gloria Estefan tunes, keeping the Latin SD spirit going. 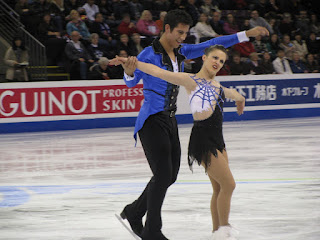 After a quick trip back to the Cheyenne Mountain Resort for lunch, my friend and I returned to the arena for the pairs short program. It was a great event for the American pairs! Amanda Evora/Mark Ladwig, Mary Beth Marley/Rockne Brubaker, and Caydee Denney/John Coughlin all treated the home crowd to great performances. Of the other competitors, two pairs caught my eye - Yue Zhang/Lei Wang of China and Paige Lawrence/Rudi Swiegers of Canada. I hadn't seen Zhang/Wang at all before, and I thought they had a nice softness and elegance about them. This was my first time seeing Lawrence/Swiegers skate live, and I liked the relationship between the two of them and their commitment to the character of their program. 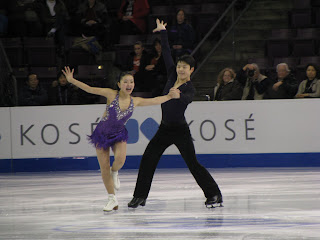 The short dance followed, and the final group had a USA vs. Canada theme with Meryl Davis/Charlie White and Tessa Virtue/Scott Moir vying for gold, while Maia Shibutani/Alex Shibutani and Kaitlyn Weaver/Andrew Poje battled for bronze. I thought the Shibutanis gave the performance of the night, totally letting loose and owning every movement. My favorite part was when Alex let out a loud "whoop" during the program. On a fashion note, I wish Meryl would go back to the gold dress she wore at Nationals, and I'd like to see Tessa return to the pink fringe. I don't think the style of her new purple dress flatters her.

There was a row of restaurants down the street from the arena, so we thought dining options would be plenty, but everyone in the arena seemed to descend upon the restaurants all at once. With the long waits, we opted for Chuck-E-Cheese, where we could relive our childhoods and get in and out quickly. We returned to the hotel after dinner and stopped in the restaurant for the delicious dessert bar. Everything I ate at the Cheyenne Mountain Resort over the weekend was great! 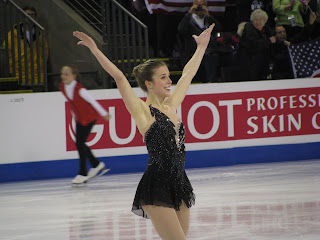 The ladies free skate was in full swing by the time we got back to the arena. The skating in the penultimate group was disappointing, but the final group brought lots of excitement. Caroline Zhang and Ashley Wagner inspired standing ovations, and Mao Asada thrilled us with a beautiful triple axel. I hadn't seen Mao skate live in a few years, and I'd forgotten how she floats across the ice.

Sunday morning started again with dance practice, followed by the pairs free skate. Unfortunately, the altitude may have had an effect on the skaters as the competition was quite sloppy. The two best performances were given by Denney/Coughlin and Sui/Han. The Chinese pair still look like junior skaters to me, so I thought they were a bit overmarked. It was scary watching all the guys lift the girls near the end of the programs when I knew they had to be struggling with the altitude. I had to hold my breath a few times. 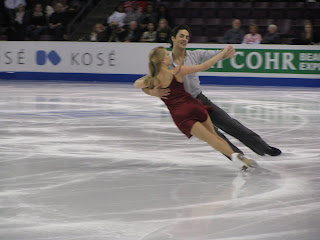 After the messy pairs event, I became even more worried about the skaters making it through their free dances with the altitude issues. There were indeed some scary moments, such as Alex Shibutani looking terribly ill after he and Maia skated. And I audibly gasped during the final moments of Meryl and Charlie's free dance because I thought Charlie might face plant on his butterfly leap. Weaver/Poje gave the most memorable performance in my opinion - they didn't look affected by the conditions at all. 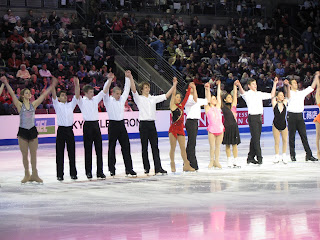 The Exhibition wrapped up the event, and I greatly enjoyed a number of the performances. Takahiko Mura rocked out to one of my favorite Muse songs, "Neutron Star Collision," and Narumi Takahashi/Mervin Tran showed they could dance in their program to "Little Less Conversation." The Broadmoor Skating Club's group number was a lot of fun - seeing all the pairs teams together on the ice and seeing Larry Ibarra make a cameo with a great backflip!

The three Exhibition programs I'll remember most are Evora/Ladwig's, Adam Rippon's and Daisuke Takahashi's. Evora/Ladwig displayed so much joy in their program. They have such great class in their skating. Adam extracted every ounce of emotion from Rachmaninov's beautiful Piano Concerto No. 2. He looked completely at peace and in the zone as he flew across the ice. And Daisuke. What more can be said about him? He skated to a quiet instrumental piece, but he made it larger than life with his presence and his liquid-like movements. I feel so privileged every time I see him skate live. 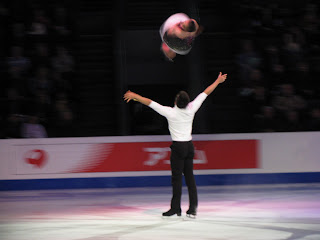 I've added a couple of videos from the Exhibition to the end of my Sunday photo album here. One is a little interview with Adam Rippon and the other is Mark Ladwig introducing Caroline Zhang.

I was spoiled this year with so many events to attend in North America. I'm sad this was my last skating trip of the season, but I'll still be blogging! Check back for more thoughts on the skating world and also updates on the progress of my sequel to LIFE ON THE EDGE!
Posted by Jennifer at 11:39 PM