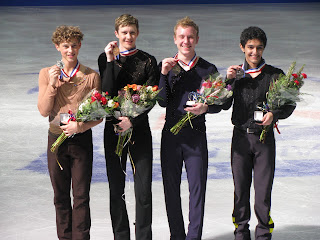 Sunday brought another early wake-up call because the Friends of Figure Skating breakfast was scheduled for 8:00am at the arena. After mingling with a few skaters, I headed to the concourse to kill time before the second group of men took the ice for their free skate. In that second group, Alex Johnson skated wonderfully, and I attempted to throw a stuffed Smuckers strawberry onto the ice, but it flew sideways and almost hit the IceNetwork commentators. It would've been awesome had it landed on their desk! 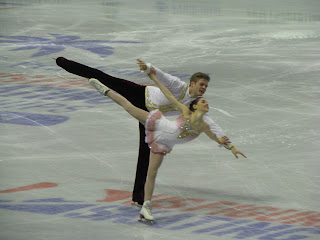 There was barely time to breathe between the men's event and the pairs free skate. My nerves were again on edge for a couple of teams. The first group skated magnificently, highlighted by the balletic performance of Gretchen Donlan/Andrew Speroff. The final group had a few missteps, unfortunately by my favorite teams. The results didn't quite shake out as I'd hoped, but I do think we have a strong team going to Worlds. 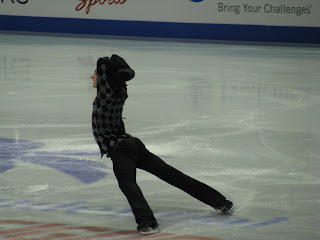 Another quick turnaround followed the pairs and led into the final two groups of the men's free skate. In the first group, Jonathan Cassar inspired a standing ovation. There is a plethora of beauty in his skating. Also skating well in the first group was Grant Hochstein, another lyrical skater who doesn't need the jumps to be entertaining.

In the final group, Adam Rippon and Jeremy Abbott both redeemed themselves with strong performances after last year's Nationals disappointments. Jeremy's free skate to Muse suits him so well. He just flows through the connecting moves and hits every nuance of the music. 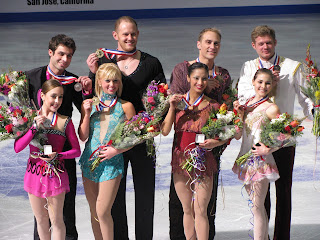 The pairs medal ceremony provided some humor when Donlan/Speroff first bowed in opposite directions and then broke protocol by going around the back of the podium to hug the other medalists. It was too cute.

We had a few hours before the Exhibition to unwind at the hotel, and then it was back to the arena for the final event. I'd waited all season to see Jeremy's "Hometown Glory" exhibition live, and he didn't disappoint! That program gives me chills. I hope I get to see him skate it again at Four Continents. Adam's Rachmaninov exhibition was also to die for. The music is perfect for his style.

Here are the rest of my photos from Sunday's events and a couple of videos I took at the Exhibition. The first video shows Rockne Brubaker, Mark Ladwig, and Ross Miner pretending to slingshot Alissa Czisny into the crowd during the finale. The second shows the guys talking Mary Beth Marley into using the slingshot.