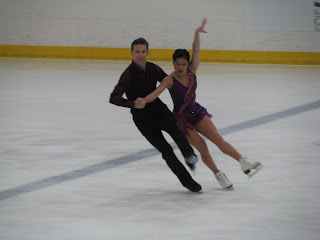 I just realized I never posted my thoughts on the rest of Saturday's events, so I'm going to take care of that now! After the Novice Free Dance (which was again too much adorableness to handle) we had a lunch break and then were back at the rink for Senior Pairs practice.

The practice group included Kirsten Moore-Towers/Dylan Moscovitch, Paige Lawrence/Rudi Swiegers, and Danielle Montalbano/Evgeni Krasnopolsky. M-T/M were looking very, very secure on their jumps and throws. I'm not sure how they fell off the pace last season, but they seem to be back in fine form this year. 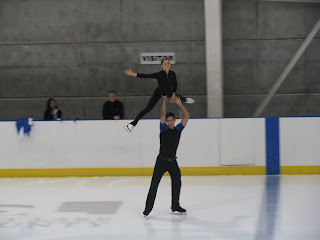 I was amazed by one of Lawrence/Swiegers's press lifts, where Paige ends up with both arms extended outward, not holding on to Rudi at all. Somehow she slides her hand out from his grip and he's just supporting her by holding her stomach. This photo shows the transition of Paige removing her hand. So cool!

I missed Montalbano/Krasnopolsky's run-through because I had to step outside to meet a friend, but I heard Dylan Moscovitch was having fun singing along to their music from Phantom of the Opera. 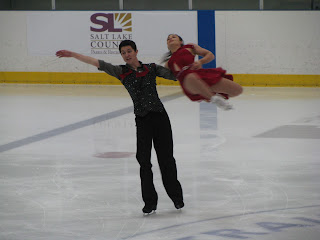 The super convenient practice rink-competition rink setup made it very easy to hop over from practice to the Senior Free Dance. In the first group, Anastasia Cannuscio/Colin McManus went all out with their bluesy/rock and roll free dance. I don't know how they had a chance to breathe! I really liked Anastasia's dress. I think the length of the skirt works better than the longer skirts she's often worn. 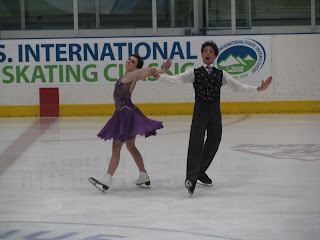 Madison Chock/Evan Bates started off the second group, and I thought they had some beautiful moments in their Dr. Zhivago program. I would like to see them connect with the audience more, as they did in their short dance. Piper Gilles/Paul Poirier followed them with a technically impressive free dance. I preferred the other Canadian couple of Alexandra Paul/Mitch Islam's program, however. I just love their lightness and the romantic quality to their skating. And I adore their music and choreography. Following them were Lynn Kriengkrairut/Logan Giulietti-Schmitt, who ended the event with a bang with their Adele free dance. I could see choreographer Stacey Tookey's influence especially during the opening section of the program. Like Chock/Bates, they have some gorgeous lifts and highlight moments. I'm so looking forward to seeing this free dance again at Skate America! 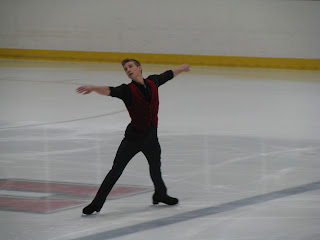 After a quick run back to the hotel, we returned for the conclusion of the Men's Free Skate. Timothy Dolensky gave my favorite performance of the afternoon. His music was a mixture of Meryl Davis/Charlie White's tango music and the instrumental part of "Mi Mancheri" by Josh Groban. I'd never seen him skate live before, and I was really impressed with his speed and his connection with the music. It was fun seeing the American guys sweep the podium with Max Aaron, Armin Mahbanoozadeh, and Ross Miner taking all the medals. I'd like to see Max put more oomph into the performance side of his program - something to add some personality.

That was the end of the skating weekend for me! On Sunday, my sister and I drove to Park City and toured the Olympic Park and the 2002 Olympic Museum. There was some great memorabilia there! I've included my photos from the park and museum at the end of my album below.

Overall, I thought Salt Lake City did a fantastic job hosting the event, and I'm looking forward to returning next year! It's a great low-key competition, and everything was so easy with the hotel just minutes from the rink. There were lots of dining and shopping options within close driving distance, and on top of all that, the area is beautiful. If you're looking for an inexpensive low-hassle skating event to attend, this one's for you!