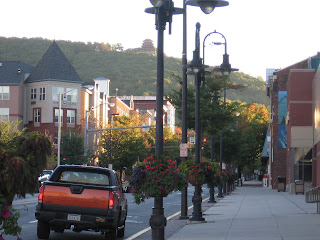 Reading, Pennsylvania served as the site of 2007 Skate America, and the trip was an adventure from the moment I left home. I had to connect in Charlotte on my way to Philadelphia, and my plane sat on the runway for six hours due to storms in the Northeast. We didn't get to Philly until 10:00pm (I left home in Louisiana at 8:00am), and then I had to get my rental car and drive in the rain and fog to Reading. I'd never been to the area before, so luckily I memorized my Google directions while I was sitting on the plane for six hours. By the time I pulled into the Sheraton at midnight, I was ready to kiss the ground. I remember Stephen Carriere was the only person in the lobby, and I'd never been so happy to see a skater! 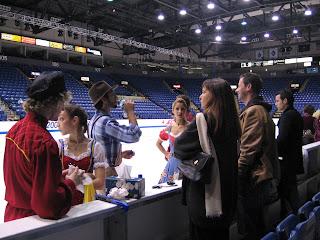 Thankfully, the stress level came down and the fun ramped up when practices started the next day. One memorable moment from ice dance practice was when Charlie White put on his hat for his and Meryl Davis's "Kalinka" original dance. Everyone in the immediate area burst into laughter, which probably wasn't the reaction Charlie was looking for. But he looked like Fievel from An American Tail!

There was another funny moment involving ice dancers - this one during the free dance. My seat was in the second row, and as Federica Faiella/Massimo Scali skated past us in a lift, all of us near the ice got a close-up view of a huge run in Federica's black stockings. It was hard to contain the laughs, which weren't really appropriate during the Yentl program.

Besides seeing unwanted images, another danger of sitting close to the ice was getting hit in the head with stuffies thrown toward the ice. Mark Ladwig was sitting high above me in my section, and he bopped me in the head a couple of times. I didn't know it was him until he apologized to me at the Friends of Figure Skating breakfast. Of course, I forgave him :) 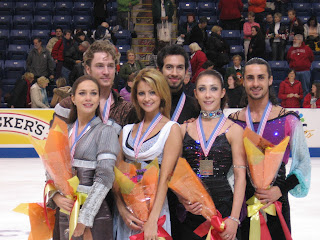 The roster in Reading was one of the best I've seen. In ice dance, we had Tanith Belbin/Ben Agosto (who debuted their awesome Chopin free dance), Meryl Davis/Charlie White, Nathalie Pechalat/Fabian Bourzat, Faiella/Scali, and Kim Navarro/Brent Bommentre.

The men's event was also full of stars with Evan Lysacek, Daisuke Takahashi, and Patrick Chan (who'd just come out of juniors). Daisuke put on a show with his techno Swan Lake short program. I'm not a fan of Nikolai Morozov's choreography in general, but Daisuke rocked that program like nobody's business. Evan threw it down with his Tosca free skate, but Daisuke was too tough to beat. 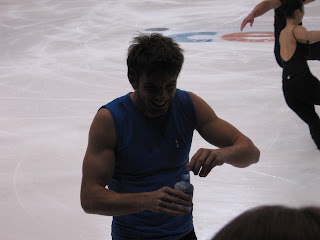 The big shocker in pairs was that Jessica Dube/Bryce Davison beat Qin Pang/Jian Tong. Other than that, I don't remember much except a lot of us swooning over Ondrej Hotarek at practice.

In the ladies event, I was of course ecstatic over Kimmie Meissner's victory. Much of the buzz among everyone else was about Caroline Zhang's bronze medal. The new senior skater made quite the splash in her first Grand Prix event.

2007 was the year of "Sexyback" at the Exhibition as Tanith/Ben, Kim/Brent, and Stephen Carriere all used the song for their programs. Despite the repetitiveness, the show was one of my favorite galas I've attended. I loved Evan's "Boston" and Meryl and Charlie's "Beyond the Sea" programs.

Next up is 2008 in Everett! Evan and Johnny finally faced off at Skate America, Tanith and Ben unveiled their new look under their new coaches, and I got a backstage tour with Craig Buntin as a surprise guest.
Posted by Jennifer at 8:47 PM