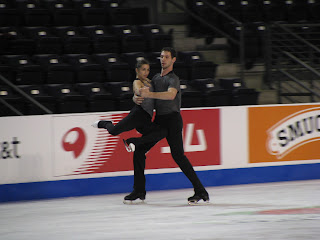 Hello from Kent, Washington! Today was practice day at 2012 Skate America, and I watched the pairs, ice dance, and the last group of men practice. The first group of pairs included Pang/Tong and Volosozhar/Trankov. I haven't seen Pang/Tong skate in a few years, and I think they just keep getting better with age. They have such wonderful flow and lyricism in their skating. They didn't practice many side by side jumps, but they did a lot of huge, beautiful throws. Their lifts looked more visually pleasing to me than they used to. Volosozhar/Trankov also showed off some huge throws. They didn't do many side by side jumps either, and they left the practice session early. 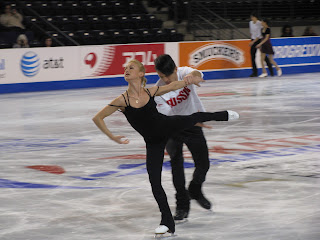 The second group of pairs included all the U.S. pairs and the French team James/Cipres. The two Skating Club of Boston teams, Marissa Castelli/Simon Shnapir and Gretchen Donlan/Andrew Speroff did full run-throughs of their long programs. I hadn't seen Marissa and Simon's tango program yet this season, and I loved it! The choreography is intricate and interesting. They maintain the tango feel throughout the program - they don't just throw in a few random tango movements like we often see in tango programs. They did the throw double axel in the run-through but landed the throw triple axel later in the practice session. Watch it here! 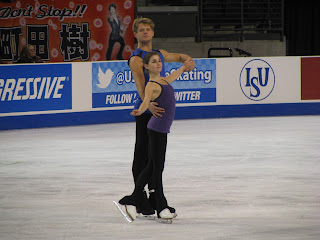 Gretchen and Andrew had some issues with the jumps and throws in their run-through but completed some big, soaring throws during the practice. Their Sleeping Beauty program was one of my favorites last season and I'm so excited to see it again. It's just plain gorgeous. Caydee Denney and John Coughlin skated their Phantom of the Opera long program. James/Cipres looked strong on the jumps and throws, and I'm a sucker for any Pearl Harbor program! 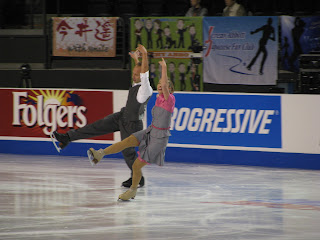 I only caught the last group of men and don't remember too much of note. I came in during Jeremy Abbott's run-through and saw he had a few issues with the jumps. Next was the ice dance practice. Every team in the first group did run-throughs of the short dance, so we had sugary sweet overload with The Sound of Music and Mary Poppins music. I'm still not loving this Yankee Polka year. The Latin rhythms might bring some awkward dance moves, but I'll take it over some of the cheese-tastic waltz and polka dances we're getting this year!

The second group had only two teams, Anastasia Cannuscio/Colin McManus and Lynn Kriengkrairut/Logan Giulietti-Schmitt, since Meryl Davis/Charlie White hadn't arrived yet. Both teams practiced their free dances and then did sections of their short dances.

Here are my Thursday practice photos (and a few scenery shots from the area):

New comments are not allowed.