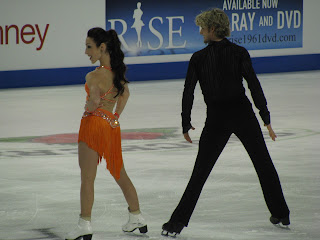 We've come to the final installment in the Skate America Nostalgia blog series - Ontario, California! With southern California being such a hotbed of skating, I thought the crowds would come out in force to support the event. Nope! The attendance was the most pitiful I've ever seen at a major event. It was a shame because it was a great spot - couldn't beat the weather, the arena was convenient to the hotel, everything was inexpensive... but no people came. 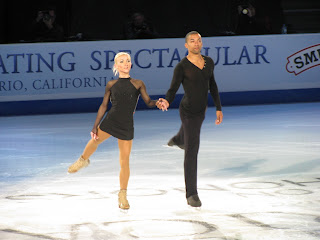 There wasn't a lot of great skating at this competition. Almost everyone seemed to still be working into form for the new season. One example was Aliona Savchenko/Robin Szolkowy, who skated terribly in the short program but came back fighting in the free skate. Meanwhile, all three American pairs, Caydee Denney/John Coughlin, Mary Beth Marley/Rockne Brubaker, and Tiffany Vise/Don Baldwin skated fabulously in the short program. Aliona and Robin again wowed me with their exhibition, this time to "Autumn Moon on a Calm Lake." Have I mentioned I love their show programs?

Both the men's and ladies' events were pretty forgettable. More memorable was the fantastic lemon and cucumber water in the lobby of the Hilton hotel. I'd never seen anything like that offered in a lobby before, and since then there's been flavored water at almost every hotel I've stayed. Must be a new fad! 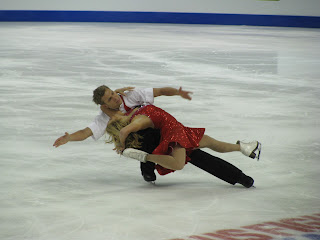 Meryl Davis and Charlie White showed no early season rustiness in their performances. They shimmied their way through their fun Latin short dance and then blew everyone away with their rousing Die Fledermaus free dance. They may have even surprised themselves with how well they skated the program they'd been practicing for only a few weeks. Another surprise were the bronze medalists, Isabella Tobias and Deividas Stagniunas. They had the crowd with them all the way in their rock and roll free dance. 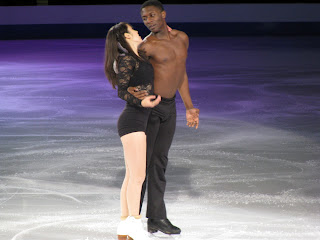 The Exhibition was entertaining as always, and it provided one particularly memorable moment when Asher Hill came out shirtless when he and Kharis Ralph skated. We all looked at each other and bust out laughing. It was one of those things you never think you're going to see at a Grand Prix event. Besides Aliona and Robin, my other favorite program of the night was Meryl and Charlie's "Someone Like You." I got to see them perform it four times last year, and I never got tired of it!

Thanks so much for travelling down Skate America memory lane with me! I'll be in Kent, Washington starting October 17 to cover all the action at this year's event! I'm particularly excited that Jeremy Abbott has FINALLY been assigned to Skate America. The ice dance competition is going to be fantastic, and pairs is going to have me chewing my nails as two of my favorite teams - Marissa Castelli/Simon Shnapir and Gretchen Donlan/Andrew Speroff - will be competing.

Between now and then, be sure to stop by on October 10 to get some scoop on Edge of the Past, the upcoming sequel to Life on the Edge!!!!