Today is the pairs free skate, so that means prize #2 of the Olympic Extravaganza will be given away! Today's prize is a wonderful Winter Olympics-themed book from my fellow Astraea Press author Beth Pond. Podium Finish is a young adult romance featuring both hockey and figure skating. Here's the skinny! 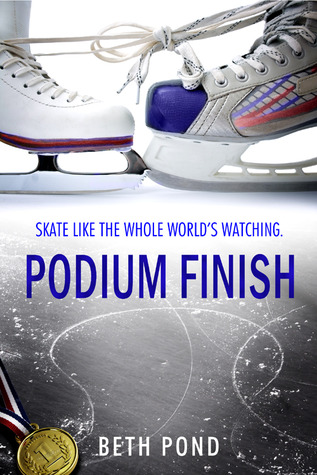 With six months until the Olympic Games, seventeen-year-old Harper's life is pretty much perfect. She's fighting for the starting spot on Team USA Women's Hockey, and for the first time ever, she has a crush on a guy who likes her back. She feels like the luckiest girl in the world, until she runs a risky play at practice and breaks her knee, thereby sentencing herself to six weeks in a cast and possibly ending her Olympic dream before it even starts.For seventeen-year-old Alex, being anything less than the best is unacceptable. That's why, after a miserable debut season at the senior level, the former junior national singles champion switches to ice dance. Her skating partner, Ace, is an "all skating all the time" type of guy, which would be fine, if he'd stop keeping secrets about the real reason he and his former partner broke up. Now is not the time for second thoughts, but how can Alex skate her best if she can’t trust her partner…or herself?As the pressure to make the Olympic team builds, the girls must rely on each other, because if there’s one thing they both know, it's that the only thing harder than skating to the top is staying there.
****

The winner of the ebook is Chanpreet Singh! Congrats, Chanpreet! Plenty more prizes to come, so keep entering in the Rafflecopter. The next prize will be revealed and given away on Friday. But stop by tomorrow to get to know the U.S. men's team before they skate their short programs!

Email ThisBlogThis!Share to TwitterShare to FacebookShare to Pinterest
Labels: 2014 Olympics