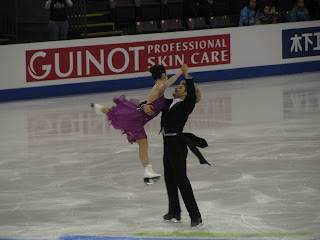 Free dance day! Can't believe the ice dance season is almost over (not counting the World Team Trophy). Let's see what the couples have in store for us today.....

Sara Hurtado/Adria Diaz - Scary moment as Sara does a camel spin and Adria almost gets too close to her. Didn't want to see his abdomen being sliced open as I ate my pasta lunch! I have to say that Marie-France Dubreuil and Patrice Lauzon are just too frapping adorable as a coaching team. They've supplanted Yuka and Jason as my vote for cutest married coaching duo!

Danielle O'Brien/Gregory Merriman - Aww, Danielle goes down during the diagonal step sequence. Their program combines some of my favorite Big Band music and is super cute. Not their best skate but I still enjoyed it.

Siobhan Heekin-Canedy/Dmitri Dun - I missed most of this while trying to catch up on the first two couples.

Julia Zlobina/Alexei Sitnikov - I think the best word to describe this performance is "voidy." I've never seen this team before and I'm really impressed! They have some cool lifts and good speed. Will be looking out for more of them in the future! 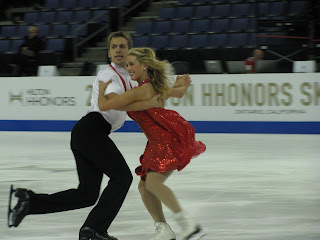 Isabella Tobias/Deividas Stagniunas - Deividas didn't have a red stripe on his pants before, did he? This program always makes me smile. Cracks me up that a boy from Lithuania chose '50's Golden Oldies music. Solid performance - they look happy!

Xintong Huang/Xun Zheng - The Chinese are bringing their fierce tango faces today. Part of this music reminds me of Jamie Silverstein/Ryan O'Meara's lounge-y tango from 2006.

Kharis Ralph/Asher Hill - Oh joy, more tango! Better costumes than the Chinese team (I feel like Captain Obvious stating that). Love the lift where Kharis's arm is wrapped around Asher's leg. They're excited at the end until they see their score. A recurring theme this week in ice dance!

Nelli Zhiganshina/Alexander Gazsi - Nelli's flowy peach dress is so pretty. I'm distracted by a possible tattoo on Alexander's chest. They definitely sell this program with total conviction. They're a bit unrefined, but they draw me into their performance.

Lorenza Alessandrini/Simone Vaturi - Tosca - wheeee! These two are a little rough around the edges, too, but they seem more polished than when I saw them earlier in the season. The disappointed looks in the Kiss & Cry continue.....

Madison Hubbell/Zach Donohue - Madi's lost the lingerie costume and has gone with very modest basic black. It's an improvement but I'd like to see a happy medium - this costume looks too much like a practice outfit. I think everyone usually watches Madi in this partnership but I find myself watching Zach more. His fluid movements catch my eye. Little off on the twizzles but everything else looked great to me!

Anna Cappellini/Luca Lanotte - This should've been Meryl Davis & Charlie White's FD music too :( I really like this program. It's charming but with emotional depth. Good finish for them after a rough couple of seasons!

Ekaterina Bobrova/Dmitri Soloviev - I adore this music from Faust. Going to close my eyes and pretend my fictional pair is skating to it..... Go Emily and Chris!

Maia Shibutani/Alex Shibutani - OMG I was thinking "Best Twizzles in the the Business" right before they messed up the twizzles. Curse me! Valiant attempt to regain the energy in the rest of the program. Hope they can come out with some fresh new material next season (no more ballroom-y free dances, please!).

Kaitlyn Weaver/Andrew Poje - Wow, Kaitlyn looks like she's really been through a rough breakup and then some when the program is over - mussed up hair, bloody knee - they left it all out there on the ice! 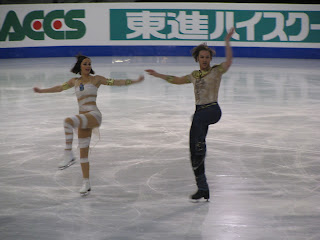 Nathalie Pechalat/Fabian Bourzat - The mummy program seems a bit silly after Kaitlyn and Andrew's emotionally charged and passionate free dance. They skate it very well, though. Nice to see them finally get a world medal.

Elena Ilinykh/Nikita Katsalapov - There's the recycled Nikolai rotational lift we've seen for the past ten years. The angsty faces aren't working for me. Seems to be a lot of open holds and easy choreography in this program. Elena looks quite unhappy with the score. She should be thankful for what they received considering the emptiness of the program.

Tessa Virtue/Scott Moir - First set of twizzles looks a little off. Think they performed this better at 4CC. Doesn't have the same "zing" that Meryl and Charlie's program had. But not surprisingly, they take first by a healthy margin.

Another year come and gone in the sparkly and often controversial world of ice dance. What will 2013 bring? Can the Shibutanis come back with a fervor and show a new side to their skating? Will the gap between Weaver/Poje and Pechalat/Bourzat continue to shrink? Are Cappellini/Lanotte finally moving into the upper tier of dancers? And will Davis/White be able to overtake Virtue/Moir again?

This might be my last post for the skating season, but keep an eye on the blog throughout the off-season. I have giveaways every month and will be doing skating features, updates on my next book (the sequel to Life on the Edge), and lots more! Thanks so much to everyone who's visited this season, my first as a blogger!
Posted by Jennifer at 4:37 PM