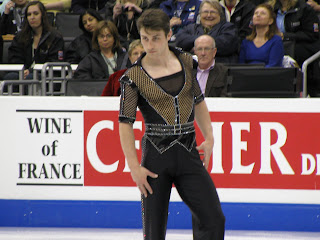 Continuing with my look back at 2009 Worlds, let's turn to the events of Wednesday of that championship week. I wasn't among the hardcore fans who sat through eight hours of the men's short program. I love skating, but I couldn't imagine enduring that marathon. I opted instead to have a leisurely morning and attend the men's practice at the Convention Center.

I'd only seen Brian Joubert and Patrick Chan skate live once before (Brian at Skate America '04 and Patrick at Skate America '07), so I was excited to watch them practice. Patrick's mastery of the blade amazed me, and Brian entertained with his showmanship. You'll probably notice that I have quite a few photos of Brian in my albums. He's just too pretty not to photograph! 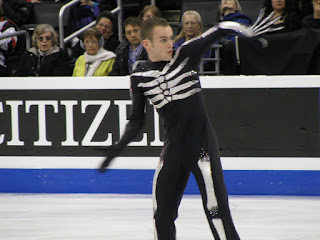 We walked to Ralph's for a lunch break and then settled in at Staples for the second half of the men's short program. Our seats were near center ice opposite the judges - generally an excellent spot - but the air conditioner was blowing right on us and there was a Canadian fan with a very large hat in front of me, obstructing my view. After a few groups, my sister and I went over to the judges' side and found seats in the first row. It was a fabulous view, and we ended up sitting there the rest of the week.

Brandon Mroz wowed us with a perfect program, and he looked thrilled/stunned with his performance and the resulting standing ovation. That was one of my favorite moments of the afternoon. The top three were also a highlight as Joubert, Chan, and Evan Lysacek set the stage for a tight fight in the free skate. Joubert provided another memorable moment as he winked in our direction during his circular footwork. Being in the front row had lots of perks! 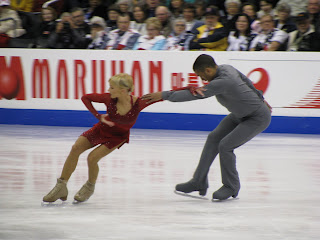 We tried to eat dinner at a small Italian restaurant near the arena, but the service was so slow that we left and went to Denny's further down Figueroa Street. When we returned to Staples for the pairs free skate, we got another Team USA thrill when Denney/Barrett blew the roof off the place with their perfect performance. The crowd stood before the music even ended, giving me goosebumps. Savchenko/Szolkowy also gave me goosebumps that night with their beautiful and chilling "Schindler's List" program.


During one of the Zamboni breaks, I got to meet a new friend from FSUniverse. I had no idea when we met that we'd become BFF's and share so many crazy skating adventures over the next few years! Yet another awesome moment in a week full of them.


Wednesday ended with the pairs medal ceremony and an uneventful return to the hotel. It wouldn't be until Thursday night that the action would pick up at the hotel bar/lobby . . . coming soon in Part III!


Here are my photos from Wednesday's events: