If you're a fan of my books and would like to help me promote them, I've created a street team, The Olympians! It will be a group on Facebook where we can have fun discussing the books, I can share exclusive teasers and tidbits, and you can win prizes! Just click on the link below and hit "Join Group." Hope to see you there!

https://www.facebook.com/groups/jennifersolympians/
Posted by Jennifer at 9:20 PM No comments:

I'm going way back for this week's Monday Moves, all the way to 1994. After watching Joshua Farris' beautiful Schindler's List program this season, a friend reminded me of Paul Wylie's stunning program twenty years ago. I hadn't watched it in years, and I absolutely love the passion he put into it. One of the moves that stood out to me was his Ina Bauer into a camel spin. Gorgeous!

Monday Moves is back! It's been a hectic couple of weeks with nationals and then work craziness last week once I returned from Boston. Work is still out of control, so I haven't had time to write a recap of my thoughts on nationals, but I didn't want Monday to go by without posting. Today I'm featuring one of my favorite ice dance lifts from nationals - Madison Chock and Evan Bates' opening lift from their Les Miserables free dance. It's a stunning combination lift! The straight-line part where Madison goes up into the air right on the crescendo of the music gives me goosebumps every time. 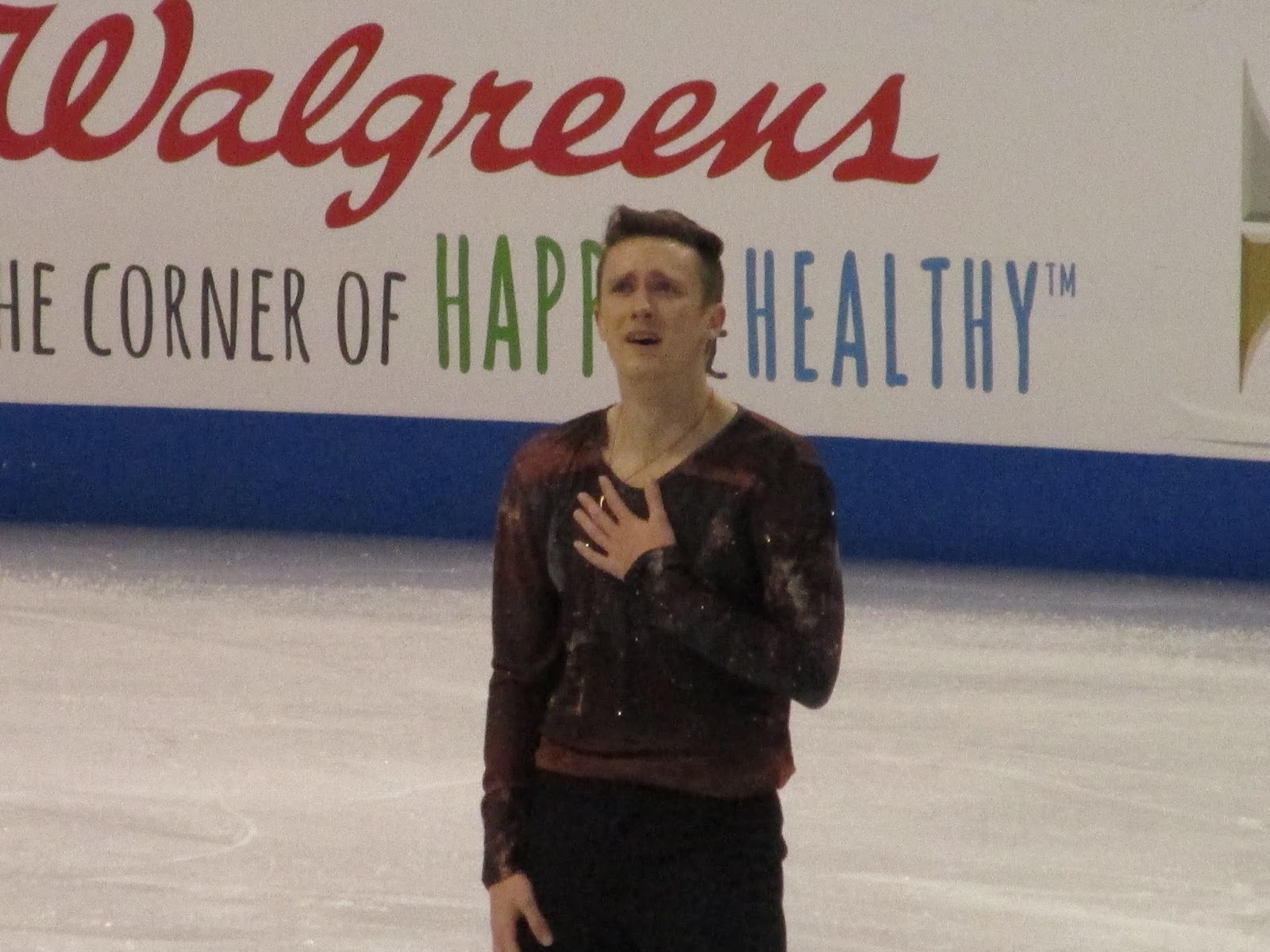 Well Sunday was even more emotional than Saturday! I tried to capture the moments as best as I could! What a week this has been. I hope I can gather my thoughts at some point!

Here are my photos from the men's warmup, men's free skate, medal ceremony, and the exhibition. 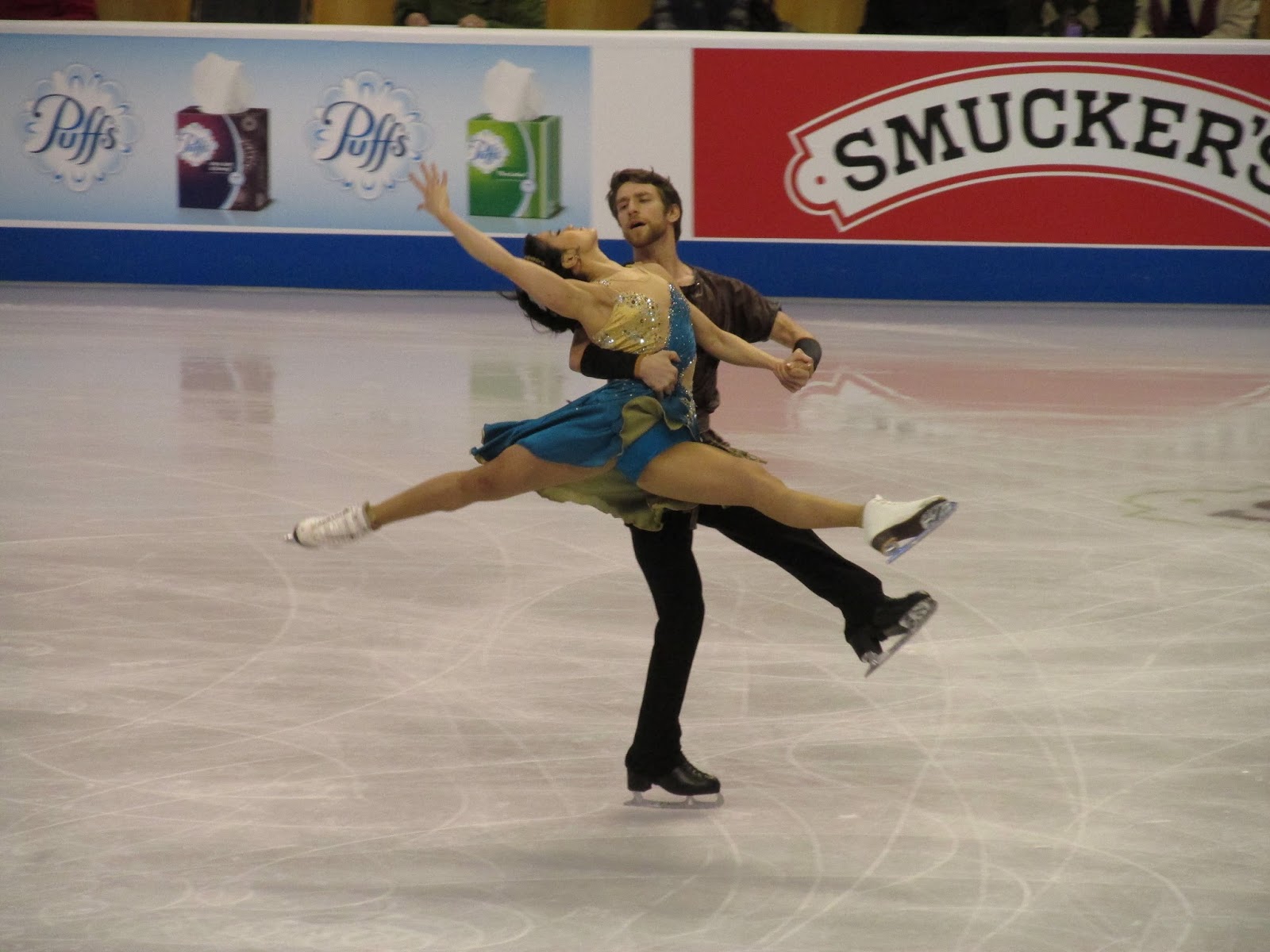 Wow, I'm still trying to process everything that happened today! Pairs and dance were made of awesomeness for the most part while the ladies gave us some major highs and lows. I think the moment of the day belonged to Felicia Zhang and Nate Bartholomay. Their performance and the emotions in the aftermath were what an Olympic year nationals is all about!

Here are the photos from the pairs free skate, free dance, and ladies free skate plus lots of medal ceremony pics! 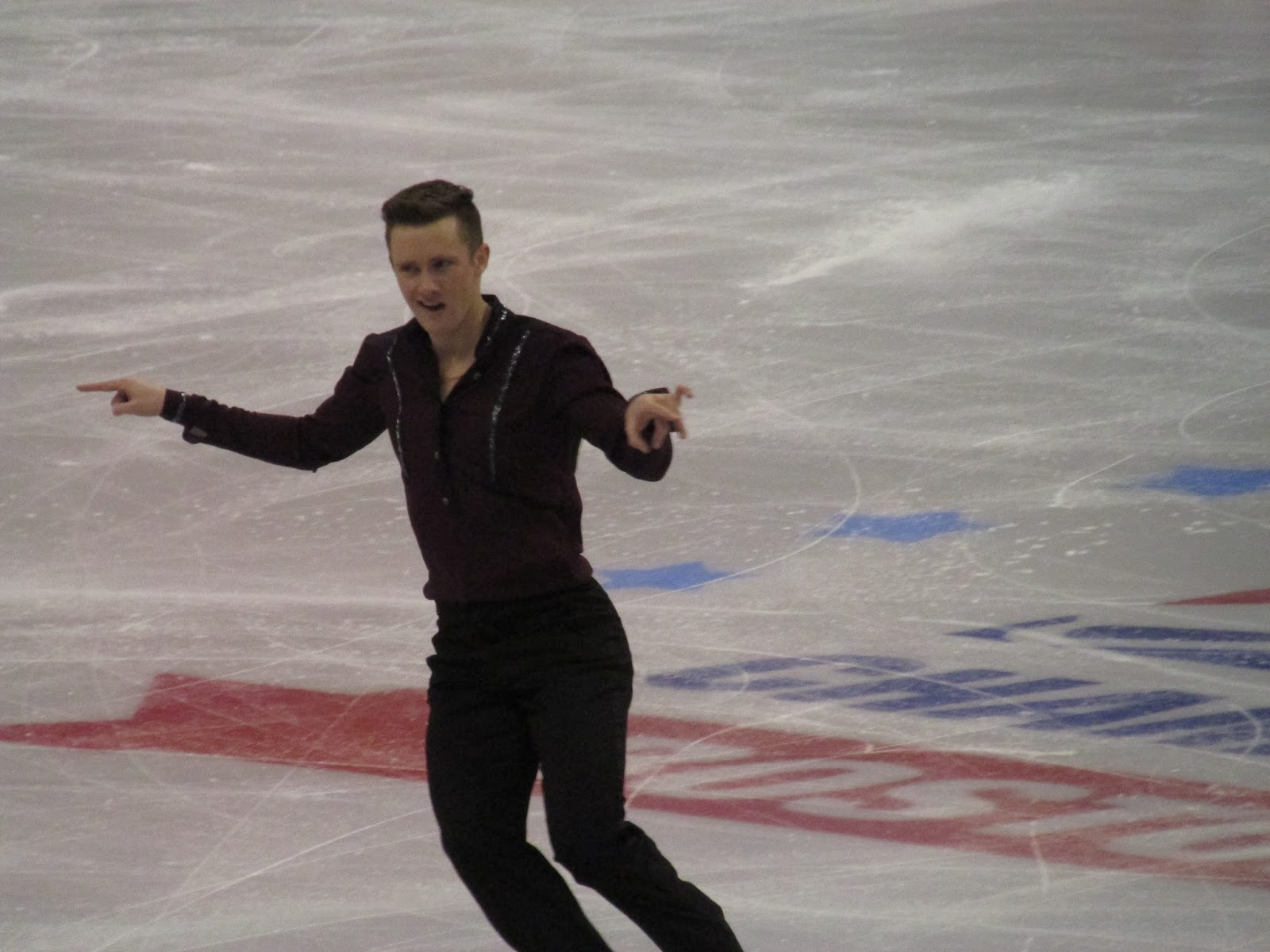 Another late night with no time to collect my thoughts! The scores were a little crazy in the men's and dance events, but I thought each were judged very fairly. Some skaters stepped up and hit out of the park today!

Here are the photos from the short dance and the men's short program.

Posted by Jennifer at 1:10 AM No comments: 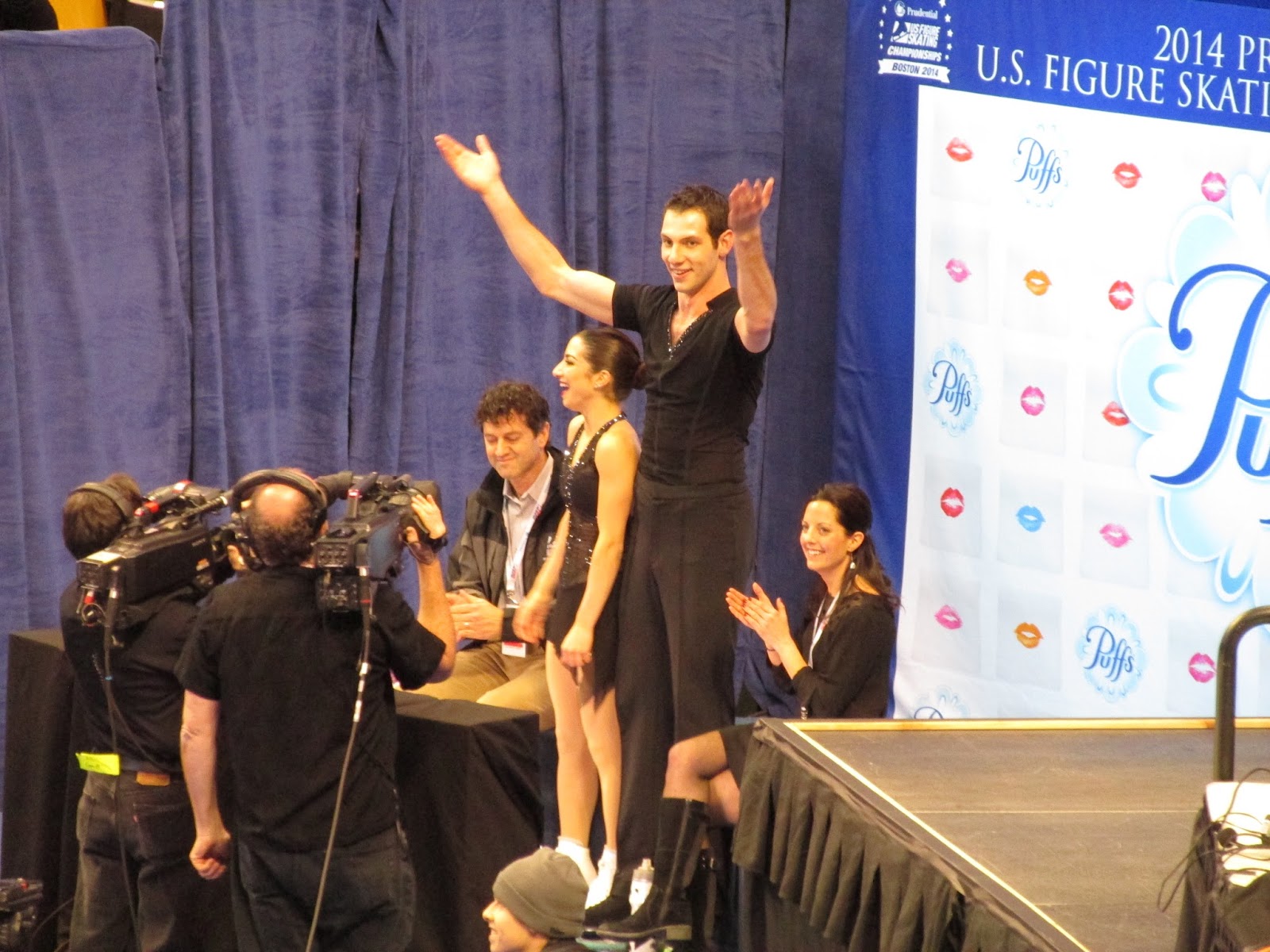 I always find myself trying to write recaps in the wee hours of the morning! I'll keep it brief - YAY Marissa and Simon!! Soooo happy they skated well and had a wonderful moment with the hometown crowd. Also a big hearty YES about Lang/Leduc skating well and being given the marks they deserve. I loved this team so much when I first saw them last year and hoped they'd be in the podium mix this season. 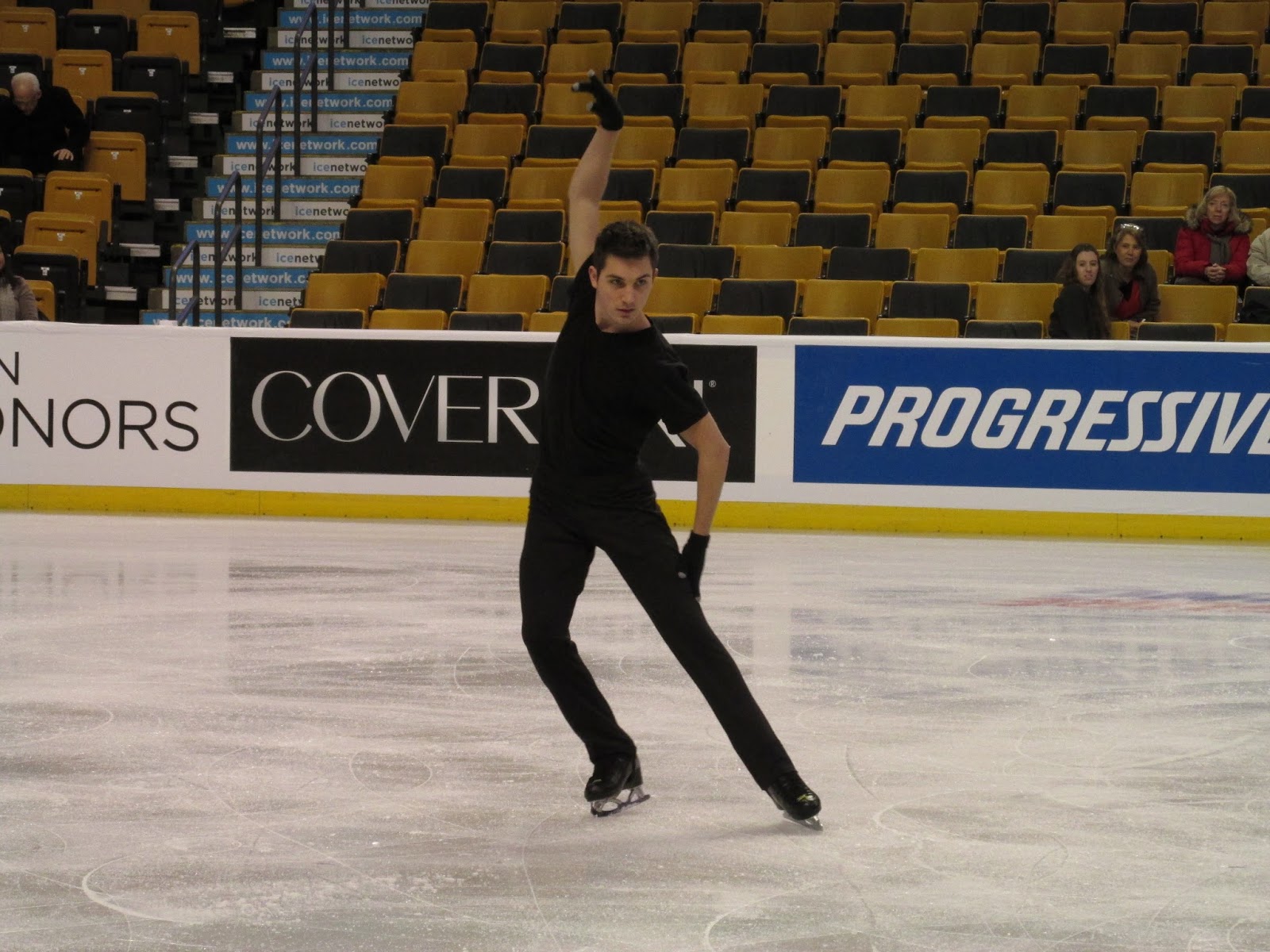 Even though I've been to Boston a bunch of times, I took a few hours to sight-see around the city this morning on one of the trolley tours. It took us to a few places I hadn't seen before, and I love seeing the city in winter with the snow everywhere (I've only been here once before during winter). After the tour, I headed over to TD Garden for the men's and dance practices. Since I have to wake up super early tomorrow for more dance practice, I won't be writing a lengthy recap tonight, but I was very pleased to see Josh Farris a lot closer on the quad toe than I've seen in the past. Adam Rippon did a gorgeous FS run-through with a couple of hiccups on the triple Axels mixed in, and Jeremy Abbot did a perfect run-through of his SP complete with amazing footwork.

Here are the photos from the men's and dance practices! 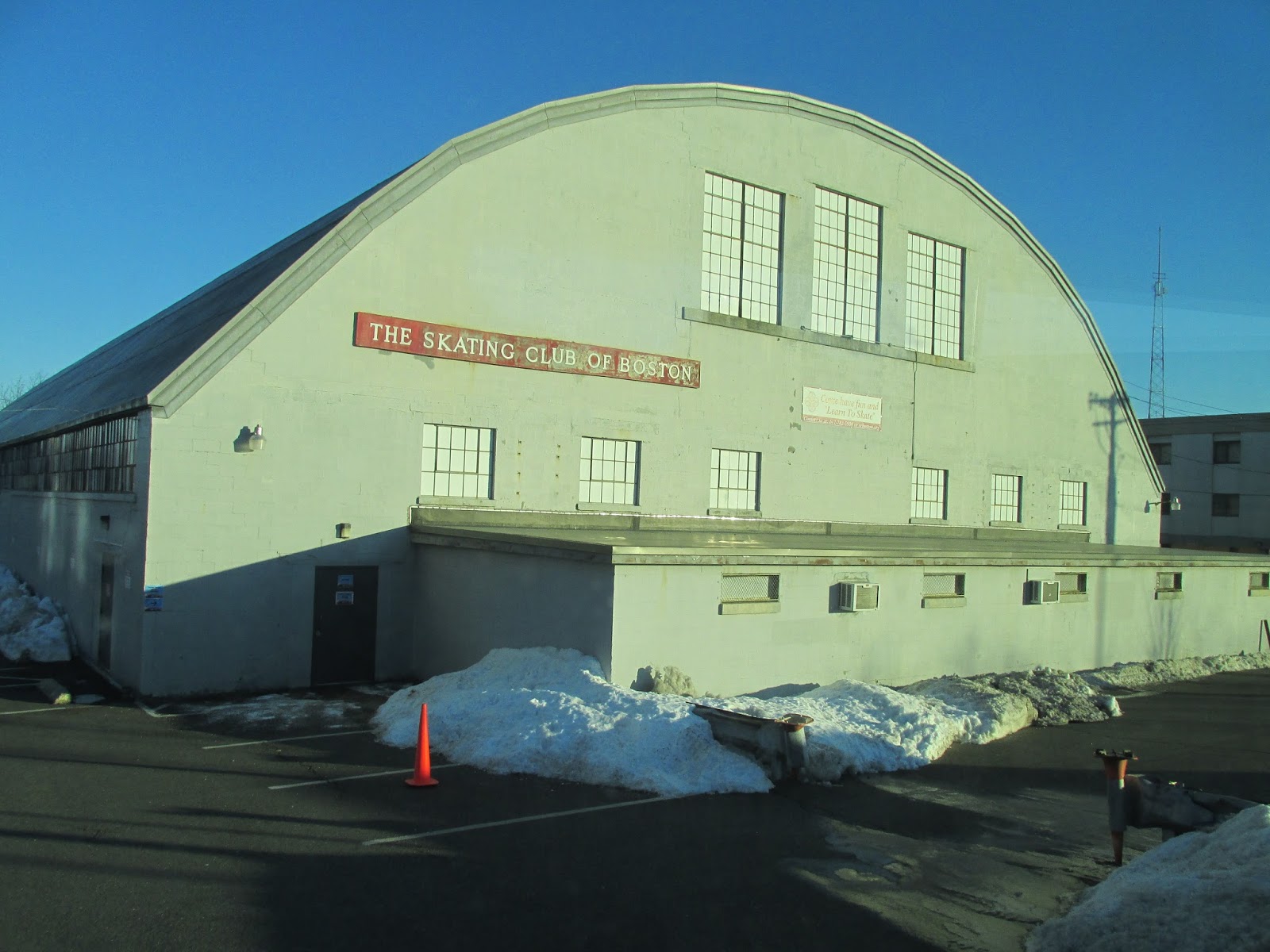 Started off this morning by braving the -6 wind chill to visit my favorite historic skating rink. The senior pairs were on the ice for practice, and I was able to see most of the first two groups before I had to leave for the juvenile pairs free skate. There were a few no-shows at practice, but the first group featured three podium contenders - Marissa Castelli/Simon Shnapir, Caydee Denney/John Coughlin, and Tarah Kayne/Danny O'Shea. Marissa and Simon did a 75% run-through of their FS and looked very strong on the lifts and the SBS triple Sals. They took command of the ice. After the run-through, they practiced the throw quad Salchow, and were a hair away from landing it cleanly each time. 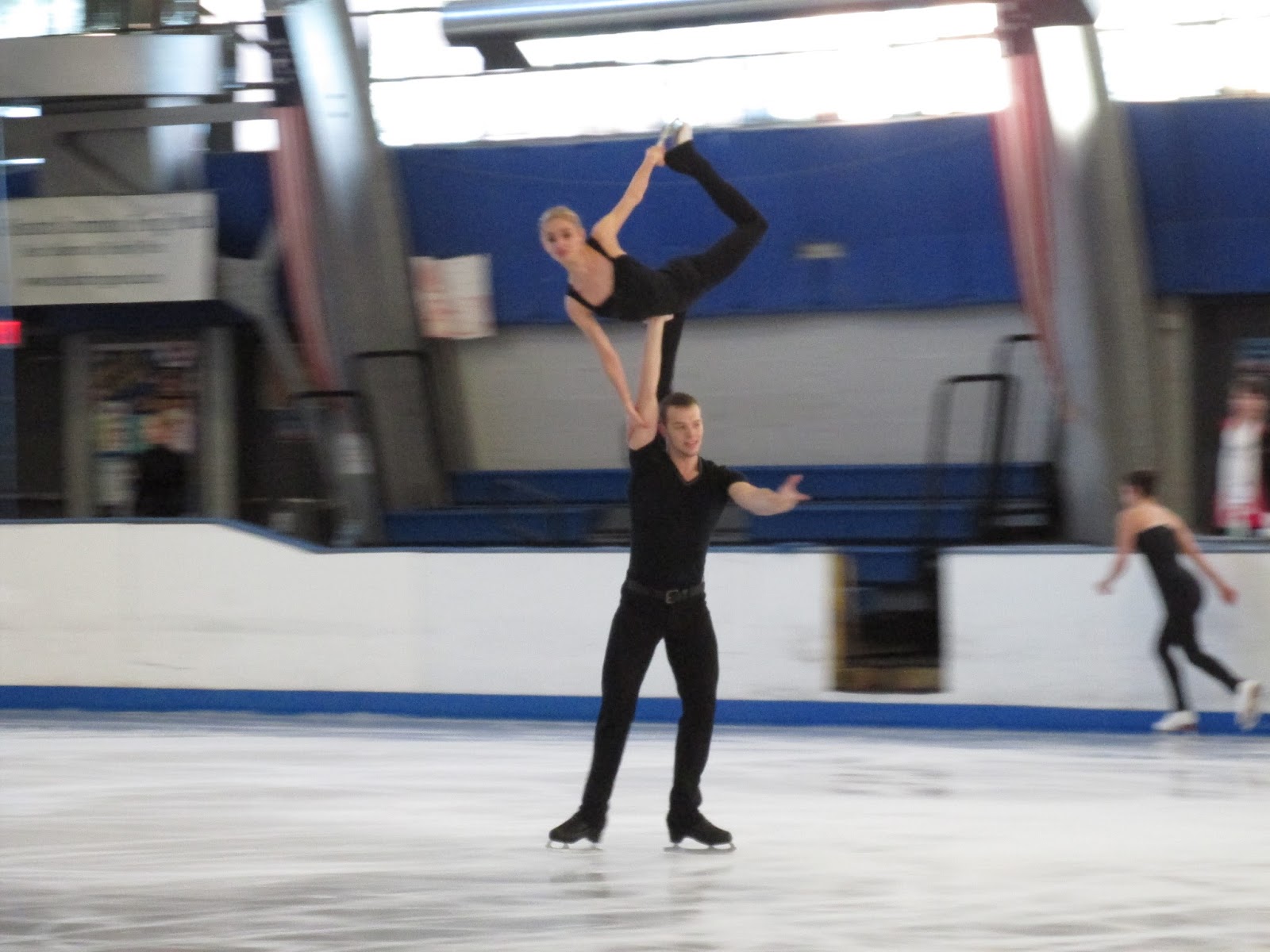 Next I traveled over to the BCEC for the juvenile pairs free skate. Overall I thought it was a really good competition with a lot of teams skating their best. I spied some of the juvenile skaters' senior pairs buddies in the crowd cheering them on, which was great to see! 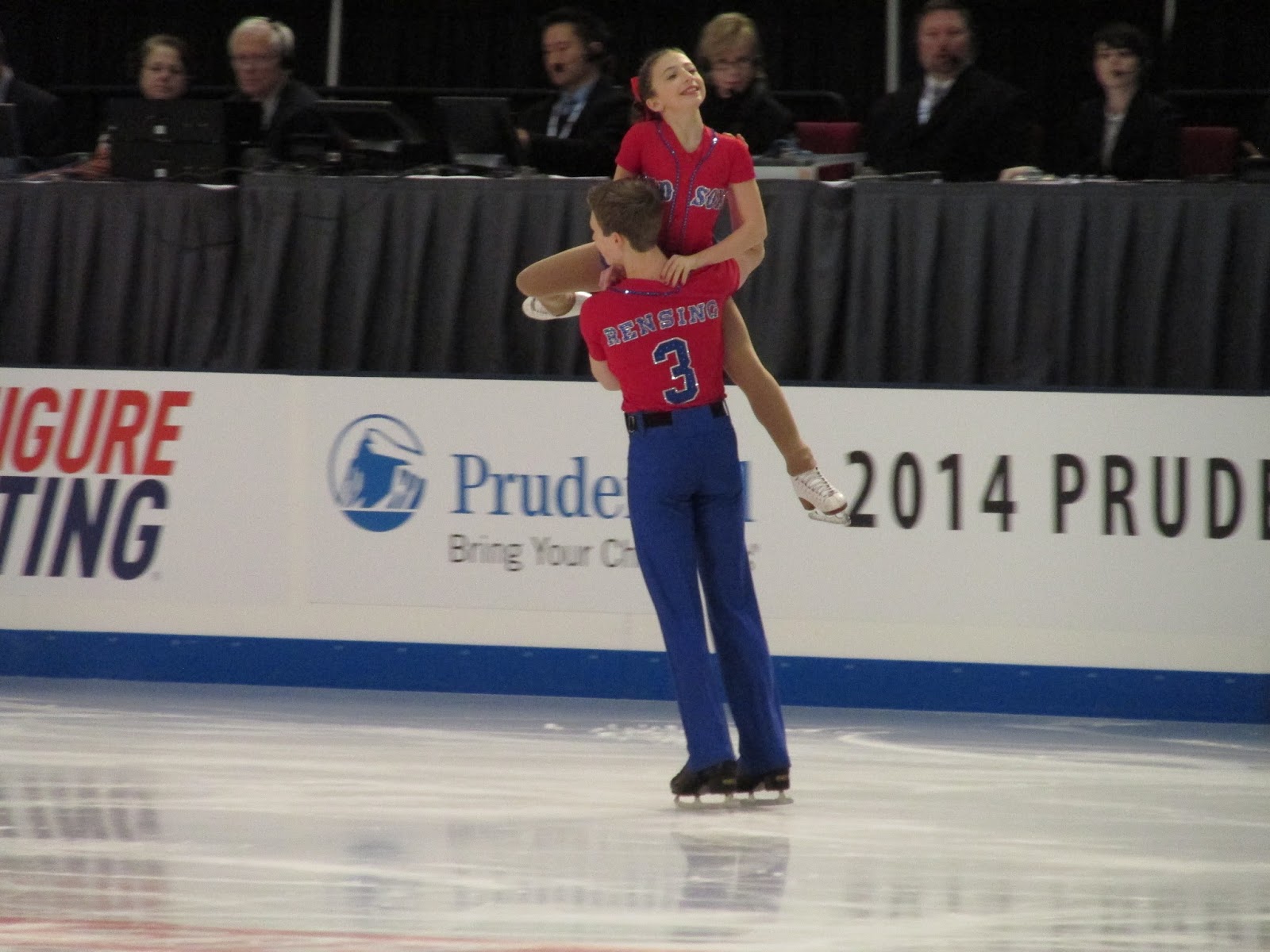 The final event of my day was the junior short dance. I think the future of US dance is in good hands with this group! My favorite up-and-coming team is Chloe Lewis and Logan Bye. I love the style and grace they have for being such a young age! 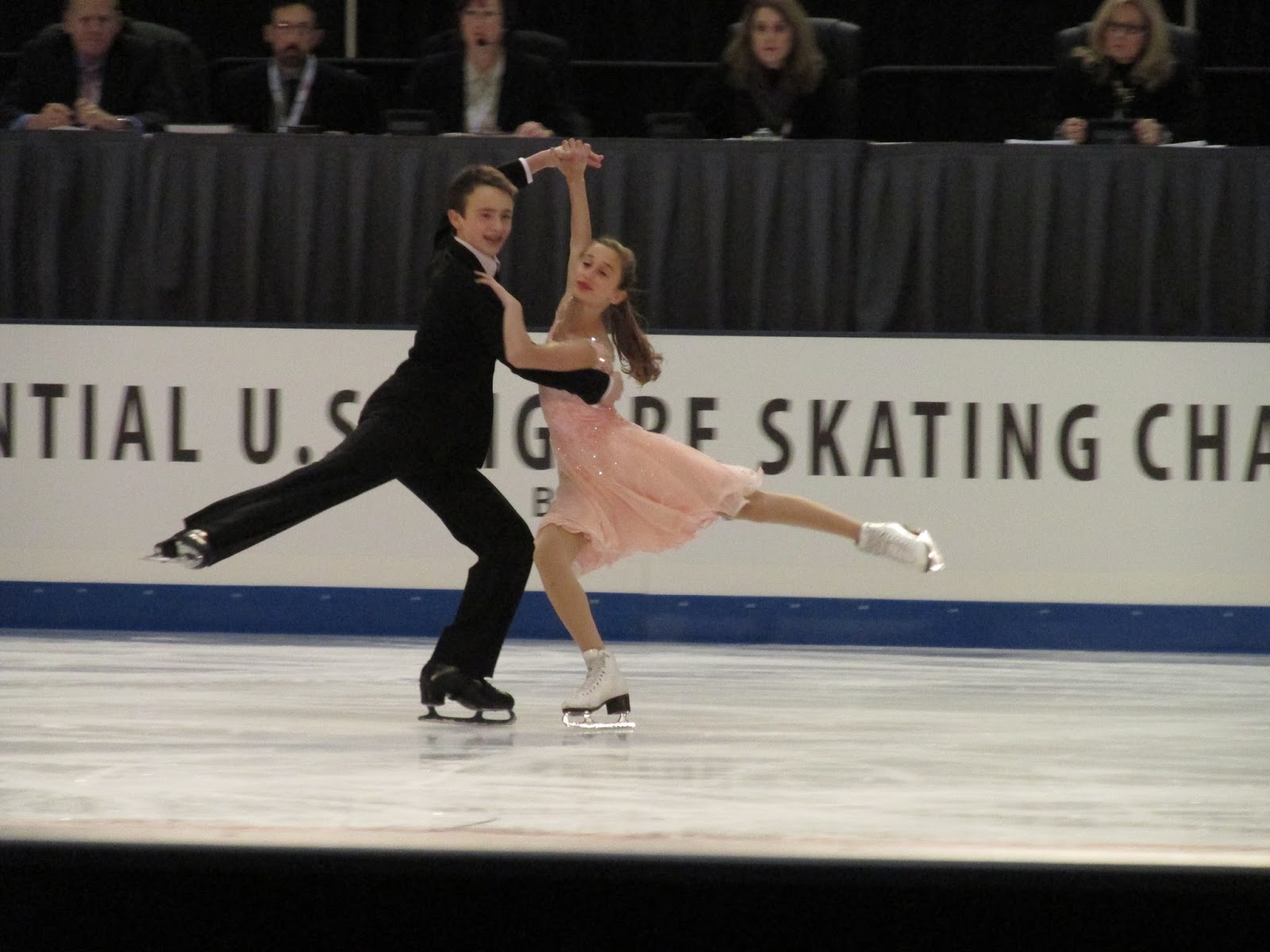 Here are all the photos from Tuesday's events!

Posted by Jennifer at 4:41 PM No comments:

Nationals week has begun! After hearing about so many flights getting canceled I was so relieved to make it here on time. I got here too late to see any events today but I did get to have a fun dinner at Legal Seafood with some old and new friends. We got a little taste of the insane wind chill on the walk to the hotel. It will chill you to the bone!

Tomorrow will start the full experience! I'll be at senior pairs practice in the morning followed by the juvenile pairs free skate and then maybe the junior short dance. Photos will follow!
Posted by Jennifer at 9:29 PM 2 comments:

Happy New Year! With a new year comes a new story and new characters to explore, and I thought I'd give you a very early peek at the first companion novel to the EDGE series. In this one, Courtney will be telling her story. It doesn't have a title yet - I'm hoping I can find inspiration in Boston next week! Here's a quick look:


Quinn kept us entertained with her ramblings as we ate, and afterward everyone scattered around the yard again. I plopped down on the patio swing, and Liza joined me with two of Em’s homemade fruit popsicles.
“Grapefruit or pomegranate?” she asked.
I chose pomegranate and took a bite of the cold sweetness. The slushiness stung my tongue.
“Josh has definitely raised the cuteness level at the rink,” Liza said, her gaze trained on him.
He stood beside Sergei on the grass, his hands in his pockets. His eyes were doing that crinkling thing again as he laughed. He was indeed very cute. And very fit. I didn’t like when guys were too beefy, and he had just the right amount of muscle filling out his T-shirt. But gay or straight, he was the competition, and eye candy was all he could be.
Posted by Jennifer at 2:00 PM 5 comments: