Signed paperbacks of GOLD RUSH are now available! They are $15 for shipping within the U.S. If you live outside the U.S. please email me at jcomeaux4@gmail.com to discuss shipping options. Please fill out the form linked here if you'd like to purchase a copy.

I will be taking orders only until Dec. 1 so that I can be sure to have the books shipped to you before Christmas. Email me at jcomeaux4@gmail.com if you have any questions!
Posted by Jennifer at 8:41 PM No comments: 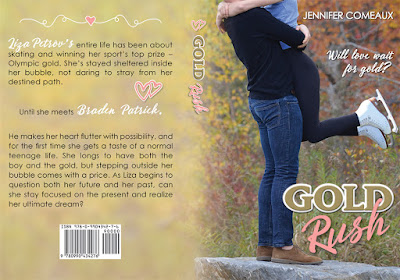 I'm so excited that it's finally cover reveal day for GOLD RUSH! I've been waiting so long to show you the beautiful cover that Sarah Schoonmaker designed. It perfectly captures the spirit of the book! I have to thank Alex Ronzio and Jimmy Morgan for being my cover models again and Marni Gallagher for doing an amazing job photographing them.

The book will be released on January 9, and you can add it on Goodreads now! The paperbacks will be available before Christmas, so look out for information soon on how to order. I'm doing a giveaway to celebrate the cover reveal, so be sure and enter below!

a Rafflecopter giveaway
Posted by Jennifer at 2:00 AM 8 comments: 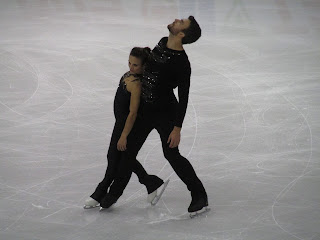 I've always wanted to do the Grand Prix North American double dip and attend both Skate America and Skate Canada. This year presented the perfect setup with my favorite dance team Madison Chock/Evan Bates assigned to Skate Canada and the location of the event being in an easily accessible city. After a fun four days in Hoffman Estates for Skate America, I flew home for two days of work and catching up on my DVR, and then it was back to the airport for a quick two-hour flight to Toronto!

I couldn't help but compare many aspects of the two events, and SA definitely won the venue category. The Hershey Centre in Mississauga was a lot older than I expected. My friend and I were very fortunate to have a rental car so we could jet in and out for food between events because the options at the arena were minimal. Shout out to the nearby Heartland Town Centre for its many eateries! Also loved the burger I had at South St. Burger. YUM.

One other area where SC could've used some improvement was the entertainment between events. I never thought I would long for Rusty, the USFSA arena host, but he is a huge step up from the girl who was screaming (and I mean SCREAMING) into the microphone at SC as Elvis Stojko launched T-shirts into the crowd. SC did do a great job with the music during all the events. They kept it current and upbeat with the pop tunes and had an even bigger library than DJ Romeo :)

On to the skating! The ladies were pretty meh. Satoko was the highlight for me, but as usual her scores did not reflect the excellent quality of her skating. I just don't understand what the judges' problems are with her. She is graceful and thoughtful in her movements, and she consistently delivers clean, technically challenging programs. Isn't that what they want? I watch her and then I watch Medvedeva and I continue to scratch my head on the gap between them. Medvedeva can do the jumps, but the arm over the head is not aesthetically pleasing the way she does it (bent arm), and it's done TOO MUCH. I also still feel some immaturity in the way she moves between elements. The PCS she is getting are pretty ridiculous in my opinion. 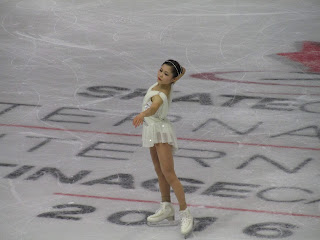 The men's event was a letdown after the spectacular final group of men at SA. We had the big names of Chan and Hanyu at SC, but they didn't deliver the goods like Shoma, Adam, and Jason did at SA. Misha Ge gave the most memorable performance for me with an inspired clean program complete with a quad (has he landed one in competition before?) I really wanted to see Hanyu's Prince short program skated well to see if he could pull off the character of the music. With the mistakes, it lost all of its steam.

The pairs event was another event with some questionable scoring. I didn't think Lubov and Dylan were three points better on PCS than Haven and Brandon in the free skate. I was so happy to see Haven and Brandon have another solid skate since they had to compete in back-to-back events. Their connection and unison are really standing out to me. Their side-by-spins are so on point now, and they just need to get the timing and execution of the jumps back. I have no doubt it will all come together with their determination! 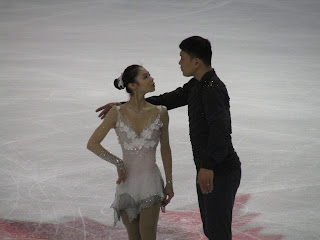 I was really impressed with the new Chinese team of Yu/Zhang. Yu is a rockstar, and I'm still sad she was forced to split from her former partner because they had such a nice lyrical quality together, but she appears to be gelling well with Zhang. They were quite lovely in the free skate. I wasn't a fan of Meagan and Eric's short program music (amazing throw triple Axel though!), but I really liked their free skate music. I appreciate their grit and their fight on all the elements, but I wish Meagan's landings on the throws and jumps didn't show the fight and grit every time. It never looks like she's in control because she lands so low to the ice.

Turning to the ice dance competition, as I mentioned the main reason I went to SC this year was to see Madi and Evan, so I was beyond thrilled with how well they skated both programs. They had the awful draw of skating first in the short dance, but they came out and killed it. Their unison in the no-touching step sequence was awesome, and they skated it with so much energy. I also loved Kaitlin and Jean-Luc's hip-hop section. Piper and Paul's disco short dance was another one of my favorites. I really appreciate that they go all in with it, never leaving the character. I thought Tessa and Scott's Prince program would flow better with less jarring music cuts. 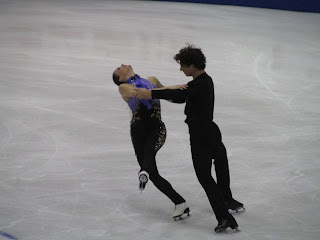 In the free dance, I give the win to Kaitlin and Jean-Luc over Alex and Mitch in the battle of the Liebestraums. The Danes, Laurence and Nikolaj, continue to improve and impress, and I thought their Edith Piaf free dance suited them so well. Tessa and Scott have always had such an easy way of moving together on the ice, but there was some shakiness in their free dance, perhaps due to nerves. The program didn't really stand out to me as there are already so many lyrical programs out there lately. I'm surprised they didn't take a bigger risk since they have nothing to lose. They have the sport's top prize already, so why not go completely outside the box? I'm so happy that Madi and Evan went in a different direction this season, and I think they've found a winning style in the modern, edgy look of both their SD and FD. They will stand out at nationals with the other top competitors doing soft and quiet free dances. 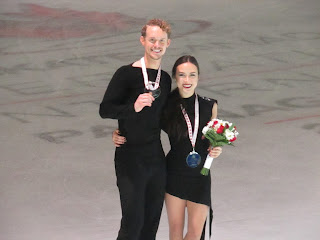 A couple of final thoughts on my Canadian adventure... there is something very exciting about driving on the highways in Canada and seeing "100" as the speed limit haha. I was also very excited about the exchange rate. If you're contemplating a trip to Canada from the U.S., now is the time to go! Everyone there was super friendly, especially the lady who let me squeeze in next to her at the dance medal ceremony when we were getting crushed by Hanyu fangirls LOL. I'm very much looking forward to the Grand Prix Final in Vancouver in 2018!

You can view all my photos from the event here:

And for some book news, the cover of my next book, GOLD RUSH, will be revealed on Monday, November 7! I'll be doing a giveaway to celebrate, so come back on Monday for all the fun!

Posted by Jennifer at 9:58 PM No comments: