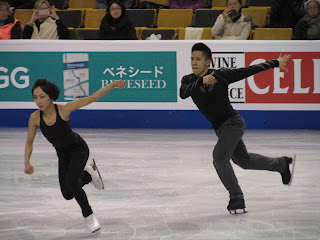 Hello from Boston!!!! I'm soooo happy to be back in one of my favorite cities. Skating + Boston = perfection!

I started the morning off at pairs practice where I was very excited to see Sui/Han, who I adore and want to see atop the podium this year. They did a run-through of their intense Spanish-themed short program, highlighted by some HUGE elements. Sui looks so fierce and strong compared to the other dainty Chinese pair girls. She and Han of them have such a great dynamic together.

Kayne/O'Shea did a gorgeous run-through of their Music of the Night free skate, leaving out the jumps and throws but including all the emotion and artistry that they've become known for. Their facial expressions are so naturally joyful and passionate. There's nothing forced or over-the-top. 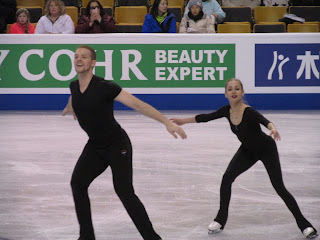 Savchenko/Massot were spot-on with their side-by-side jumps, but the throws were a little iffy and they had an aborted lift during their free skate run-through. I wish there music was more pleasing to the ear as they are a very striking couple on the ice. 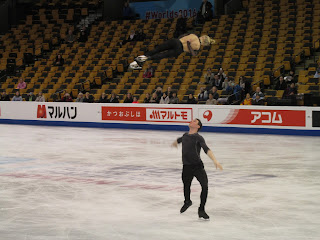 Dance practice followed the pairs, and it was time for sparkles! The first group included Cappellini/Lanotte, and Anna was sporting quite the poofy new dress. It was a bit distracting to me. They skated very well, though. The second group included the Canadian teams. I love the young team Paradis/Ouellette. There's something about them I find so charming and beautiful. I hope they can continue to move up the crowded ladder in Canadian dance. 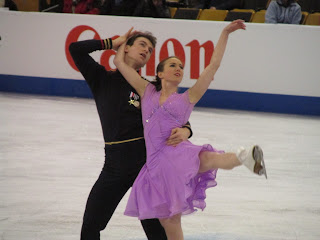 The U.S. teams were in the next group, and everyone skated full-out with lots of emotion. The Shibs and Hubbell/Donahue did their short dances while Chock/Bates ran through their free dance. 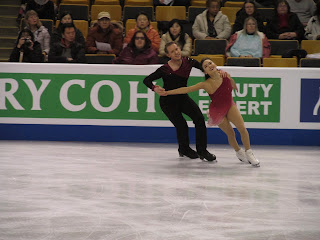 Here are all my photos from Tuesday! => TUESDAY PRACTICES

Email ThisBlogThis!Share to TwitterShare to FacebookShare to Pinterest
Labels: 2016 Worlds

Hi there! It's been a while since I've posted any GOLD RUSH news so I thought I'd give an update. First, in case you haven't heard, GOLD RUSH is a new standalone skating romance I'm working on. Liza from the Edge Series and the Ice Series is the main character, and the story follows her journey toward the 2014 Winter Olympics. It's a spin-off from the other series, but you won't be missing any vital information if you haven't read the other books (but you should definitely consider checking them out!)

Since I was in Courtney and Josh's world for so long, it's taken me a long time to get acquainted with the new characters and to figure out where Liza's story is going. I didn't want to rush the process because I adore Liza and want to give her the amazing story she deserves, so I've been taking my time in settling into this book. I finally feel like I have a really good grasp on Liza's mindset and also the mindset of Braden, the intriguing new boy in her life. I'm really excited about how things are developing between these two!

I don't have a definite release date yet, but I promise to provide more frequent updates about my progress going forward. How about a little teaser to get things started? :) 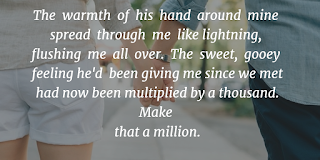 Thank you as always for being so patient and for being the most awesome readers ever!! I can't tell you how much it means to me to know there are people out there waiting for this book. It is truly a dream come true to know that my books bring people enjoyment! :)

Oh, and before I go, be sure to check back here next week for lots of photos from the 2016 World Figure Skating Championships in Boston! I'm so excited to go back to one of my favorite cities and soak up more writing inspiration!