Trying out my first Teaser Tuesday with a little snippet from LIFE ON THE EDGE. The first book in the EDGE series is available at all online outlets and only 99 cents on Amazon!

With my ears buzzing from the cheers, I swiveled to face the kiss and cry. Sergei's smile gleamed brighter than my costume. As Chris and I approached him, he banged our skate guards together in celebration. I hopped off the ice and threw my arms around his neck.

Sergei went to kiss my cheek as I turned to speak, and his lips grazed the corner of my mouth. My already pounding heart staggered against my chest. The moment had been like tasting one crumb of the most delicious dessert imaginable and then having it taken away.

Young and the Restless Set Visit 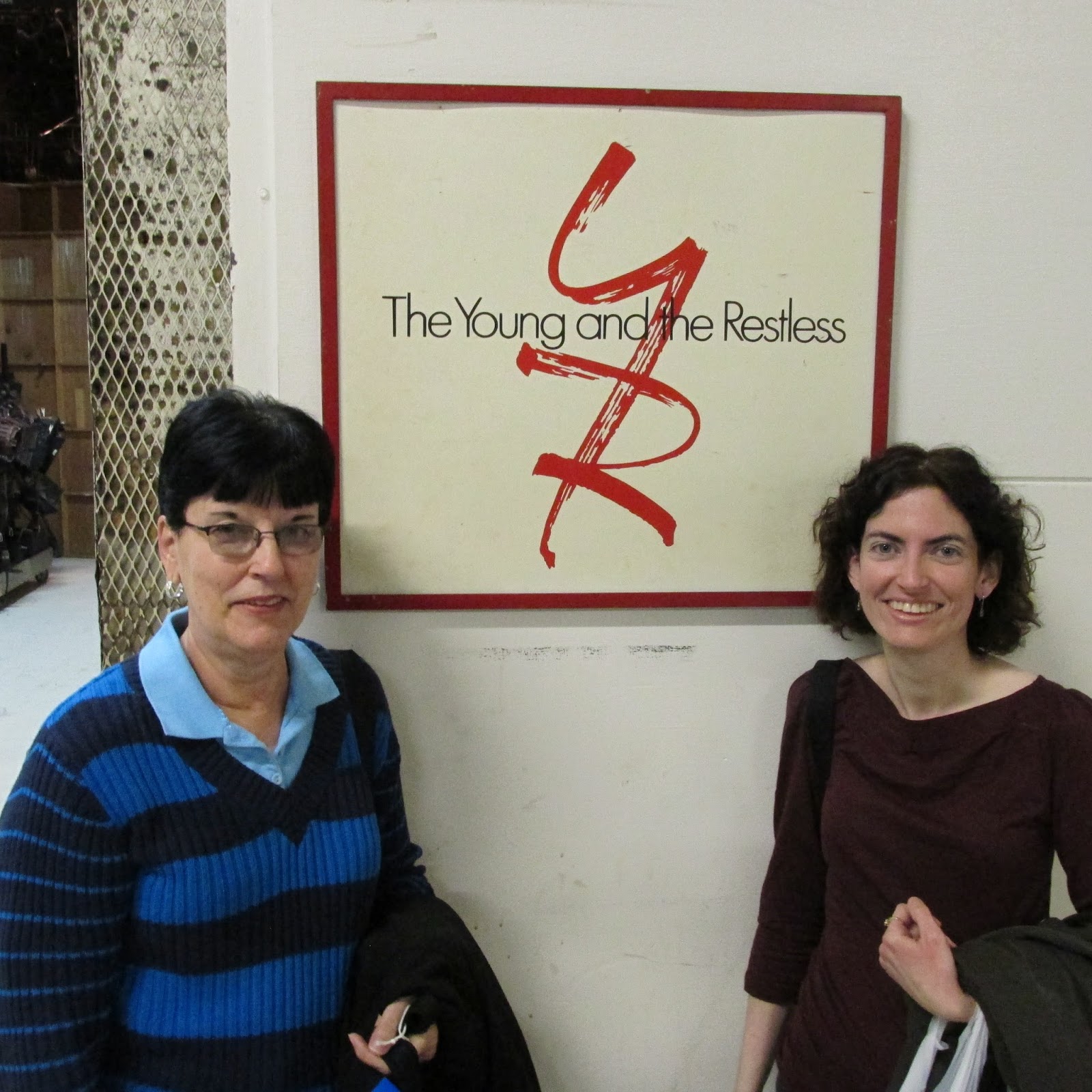 Last fall I won a charity auction for a Young and the Restless set visit and lunch with cast member Christian LeBlanc (Michael Baldwin), and I pretty much freaked out for days! I've watched The Young and the Restless since I came out of the womb. My mom's watched it since the day it premiered, so I knew immediately that she had to accompany me on this once-in-a-lifetime trip. Last month we traveled to Los Angeles, and from start to finish the experience was INCREDIBLE. I had to wait to blog about it because the episode we saw taped was just aired this week, but I wanted to share the details of our amazing day!

We arrived at CBS Studios a little before 9am and Ray, the lighting director whose wife had set up the charity auction, took us onto the sound stage. All the sets are lined up on two sides with space in the middle for the cameras and such. Stitch (Sean Carrigan) and Victoria (Amelia Heinle) were filming their hospital date scene, so Ray got us chairs to sit and watch. We were sitting in the set for Billy and Victoria's living room! The actors rehearse the scene while still looking at the scripts. The crew gets all the blocking figured out, and then they shoot it. For the date scene, they had salad in the containers and Amelia was eating some of the veggies between takes. There were a couple of lines and movements the powers that be (TPTB) wanted them to redo (for example, Victoria opened Stitch's container at first and TPTB told her not to. She said it was the mother in her coming out lol). The whole process of rehearsing a scene and shooting/re-shooting doesn't take long. We saw about twenty scenes filmed in three hours!

The actors speak so quietly while they're filming the scenes that it's hard to hear them. We had to listen very closely. It's also dark in the studio except for the bright lights shining on the set currently being filmed. Victoria and Stitch's next scene was the conclusion of their date, and they had a steamy kiss at the end. It was kind of awkward watching that being filmed lol. It's a lot different when there's no "soapy" music playing in the background. It's so quiet and just them kissing. On the episode they cut some of the kiss because it lasted a lot longer when we saw it filmed.

When Victoria and Stitch were finished, all the cameras rolled down the line to the motel room set where Joshua Morrow (Nick) and Camryn Grimes ("Cassie") filmed their scenes. As my mom and I sat on the edge of Sharon's living room (which looks so tiny compared to TV), Sean Carrigan walked in front of us and told us "Hey" :) Robert the makeup guy (who was in charge of touching up the makeup while the actors were filming the scenes) was awesome and said he'd get us copies of the script so we could get autographs!

Joshua Morrow was hilarious during the rehearsals, always making jokes. He must be a blast to work with. When he had to open the envelope with the photos of Cassie, the clasp was closed and he couldn't get it open, so he was giving TPTB a hard time about it. Camryn also had some trouble with the props - she couldn't get the clothes into her bag quickly enough. There were more clothes on hangers and the hangers were difficult to pack, so the crew took most of the clothes off the hangers. Part of the scene was a phone call between Nick and Sharon, and Sharon Case came out in a bathrobe and Uggz to do her half behind the cameras. After they finished the motel scenes, Joshua came over because he saw us watching, and he introduced himself. He was so friendly and funny!

Next we moved across the lane so they could film the scenes in Sharon's living room with Sharon Case (Sharon), Robert Adamson (Noah,) and Kelli Goss (Courtney). Robert the makeup guy got them to come over and meet us after they finished, and Kelli was soooo sweet. They all look just like they do on TV.

We had to move to another sound stage for the next segment of scenes, so all the cameras and wires had to roll through the hallway. It was quite the production! There was a Mercedes parked in what looked like a driveway. This was where Nick and Cassie did the Newman driveway scene. Josh was hilarious during this filming because he didn't believe that he wouldn't be able to catch up to Camryn when she ran away from him. He said he was going to claim he pulled a hamstring lol.

After this the lights focused on the Newman ranch living room, and we sat next to the Crimson Lights set and watched Eric Braeden (Victor), Melissa Ordway (Abby), Sharon, Robert, and Kelli film. Eric was eating some of the peanuts on the bar between takes. It was so fun to see how intricate all the directions were. Sometimes TPTB would stop a scene to tell Sharon to move her hair a certain way. After those scenes, Robert made sure we got a photo with Eric (he called him "the god" lol) He was very nice and chatted with us! 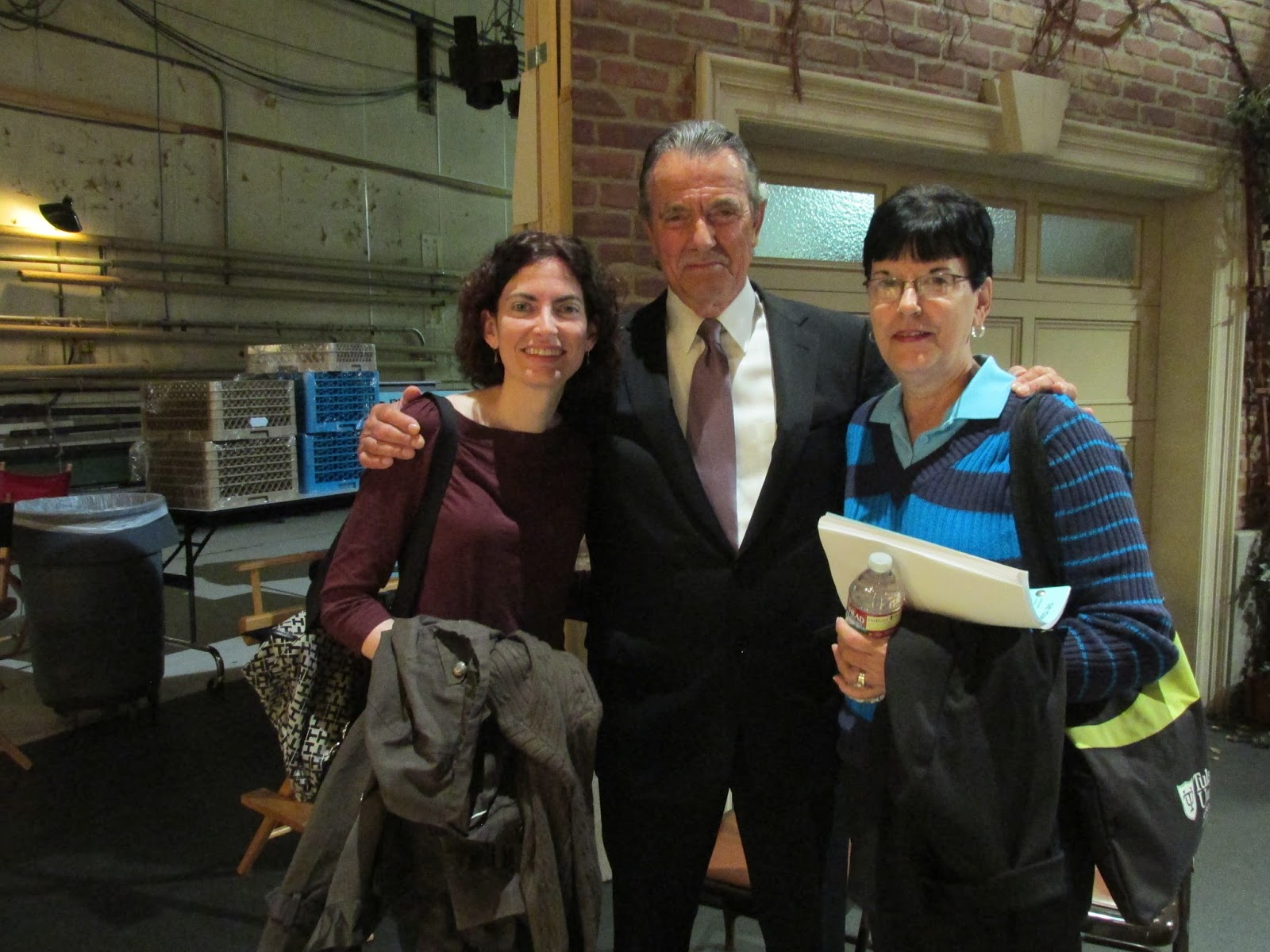 Melissa asked where we were from, and she freaked when we said New Orleans because her husband is from Louisiana and he has family in New Orleans. She and Kelli said we had to take a photo with them in the ranch living room, so they called Robert (Noah) over and we all posed on the sofa together :) 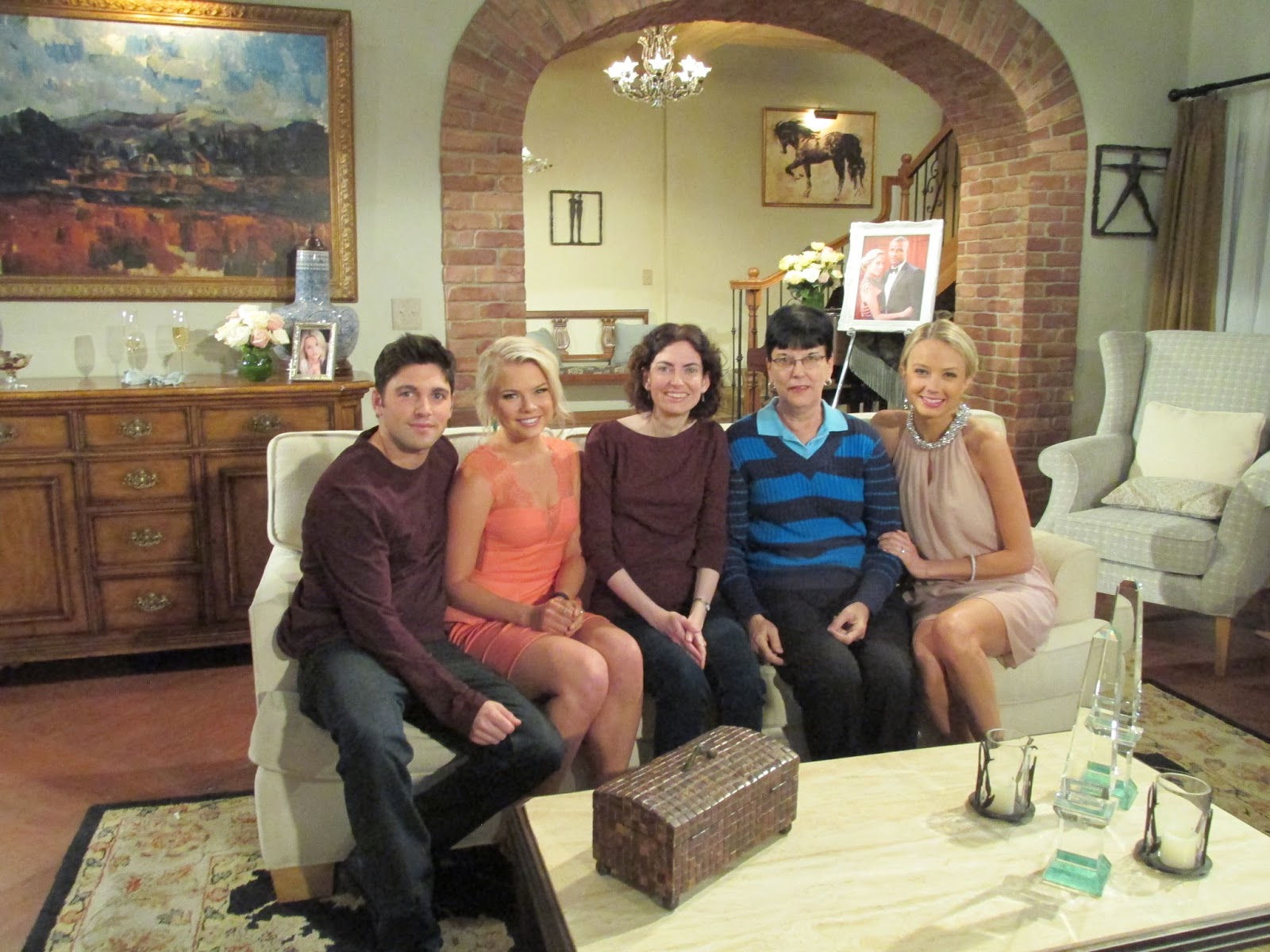 After that we moved down the line to the Athletic Club and watched Peter Bergman (Jack), Hunter King (Summer), Robert, Linsey Godfrey (Caroline from Bold & Beautiful), and Cady McClain (Kelly). We were sitting in Chelsea and Adam's penthouse while watching. 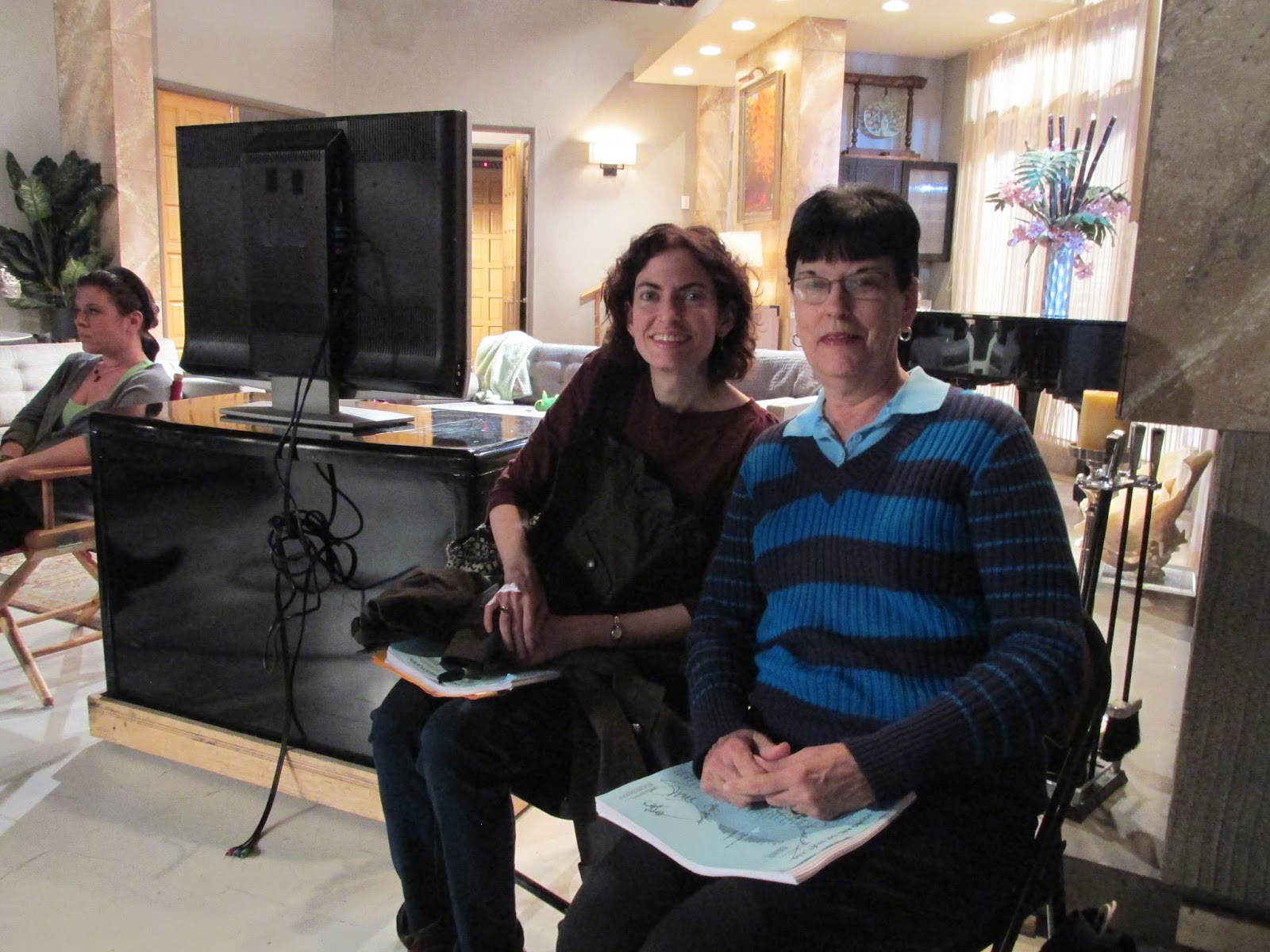 I watch B&B, so I got Linsey's autograph and congratulated her on her pregnancy (she and Robert Adamson are a couple in real life). She was very sweet! Then Hunter came over and was so nice and kept thanking us for watching the show. Peter came over after that and was super friendly and thankful, too. He has the bluest eyes I've ever seen! Peter and Cady were sitting on Chelsea's couch talking while the crew worked on the set. I didn't realize at the time that it was Cady's first-ever scene on Y&R (the scenes they taped in the GCAC that day were on last week's Wednesday episode). Hunter, Kelli, and Melissa were all hanging out off stage chatting. They seemed to be good friends. 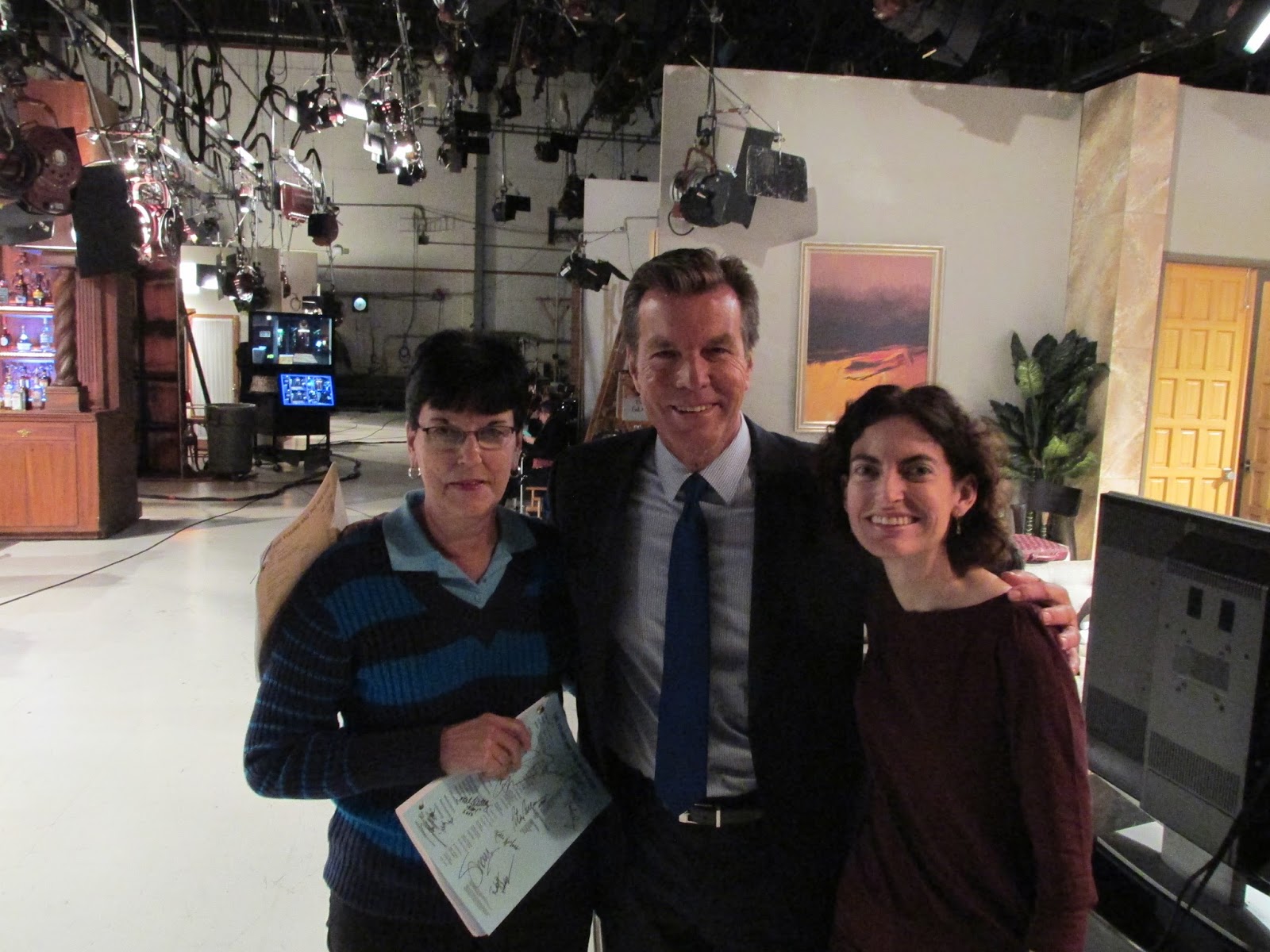 We left at noon for lunch and went next door to Maggiano's. Ray, the lighting director, was with us and Christian (Michael) was going to meet us. We walked in and I saw Sean and Amelia in a booth together! We went to the back part of the restaurant and waited for Christian. When he arrived he said Sean had yelled his name and Christian told him and Amelia to come by later. Christian was so friendly and hilarious, just a regular New Orleanian :) We chatted all about home and got to learn more about Christian's life before he was an actor. Ray had to leave early to go set up the tack room for shooting the next week, and Christian said he'd walk us back to the studio after lunch. There were only a couple more scenes being filmed that day because all Eileen Davidson's scenes had to be postponed. Her sister was ill and she had to be with her.

We finished eating, and I figured Sean and Amelia had left, but here the came! They slid into our booth and made themselves comfortable and just started chatting away. Amelia had some wine with lunch, and I think she was a little tipsy lol. We were all there talking for more than half an hour. It was insane! Sean and Amelia ordered more wine, and Sean was going to tell us who Stitch killed in his past, but I didn't want to be spoiled. He and Amelia kept asking Christian where he was taking us when we were leaving because they wanted to follow us. They were cracking us up. Sean went to the restroom and when he was walking back he did a fake fall onto the floor. It was definitely the stand-up comic in him coming out lol. When we left Sean stuck his hand out and then he hugged me instead, and I was seriously swooning! I figured I'd go ahead and hug Amelia and she gave me and my mom both very warm ones :)  Christian walked us back to the studio where we saw them setting up the tack house, and we said goodbye and thank you to Ray for an amazing day. 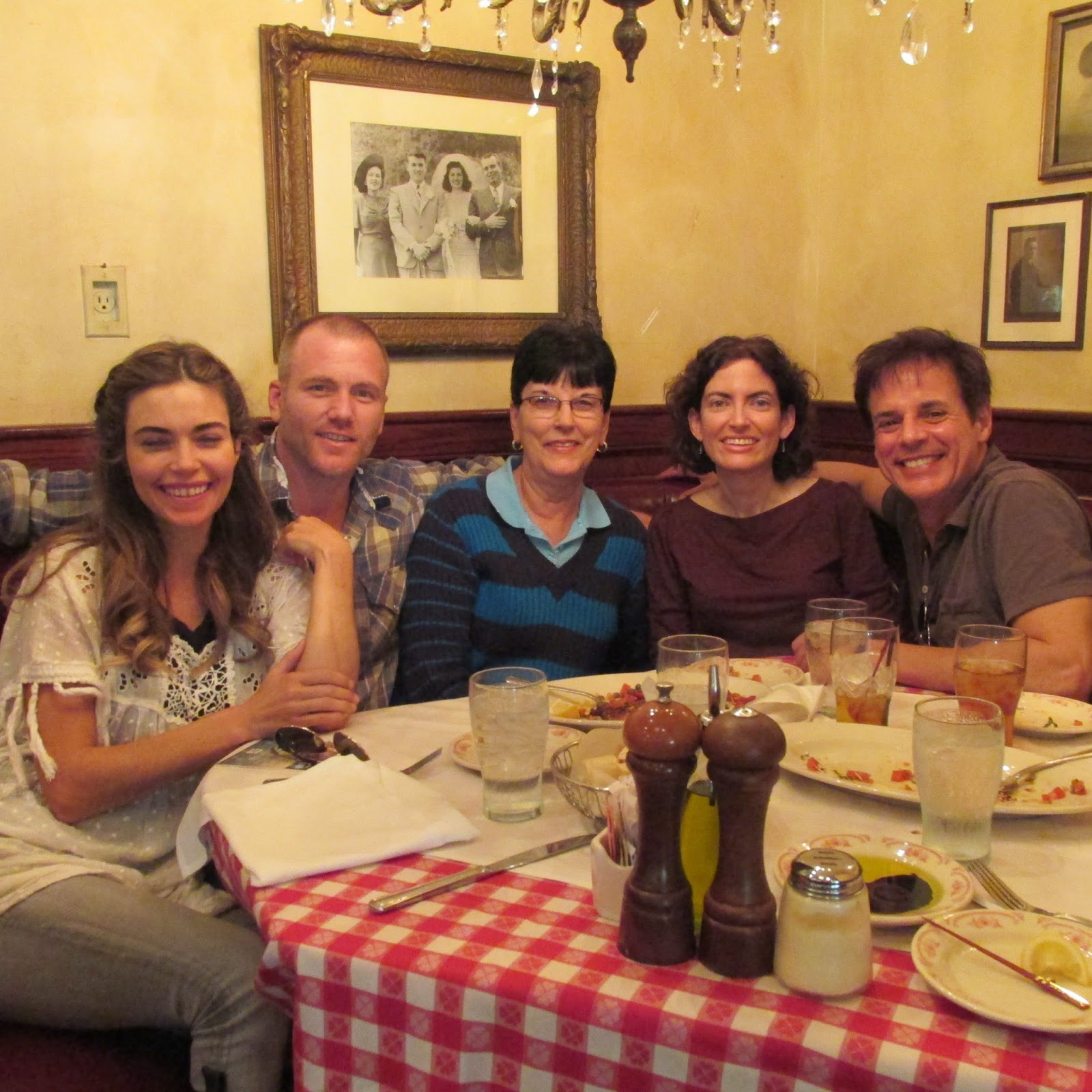 Thank you again to Y&R and all the wonderfully friendly, sweet, and generous actors and crew!!!!! 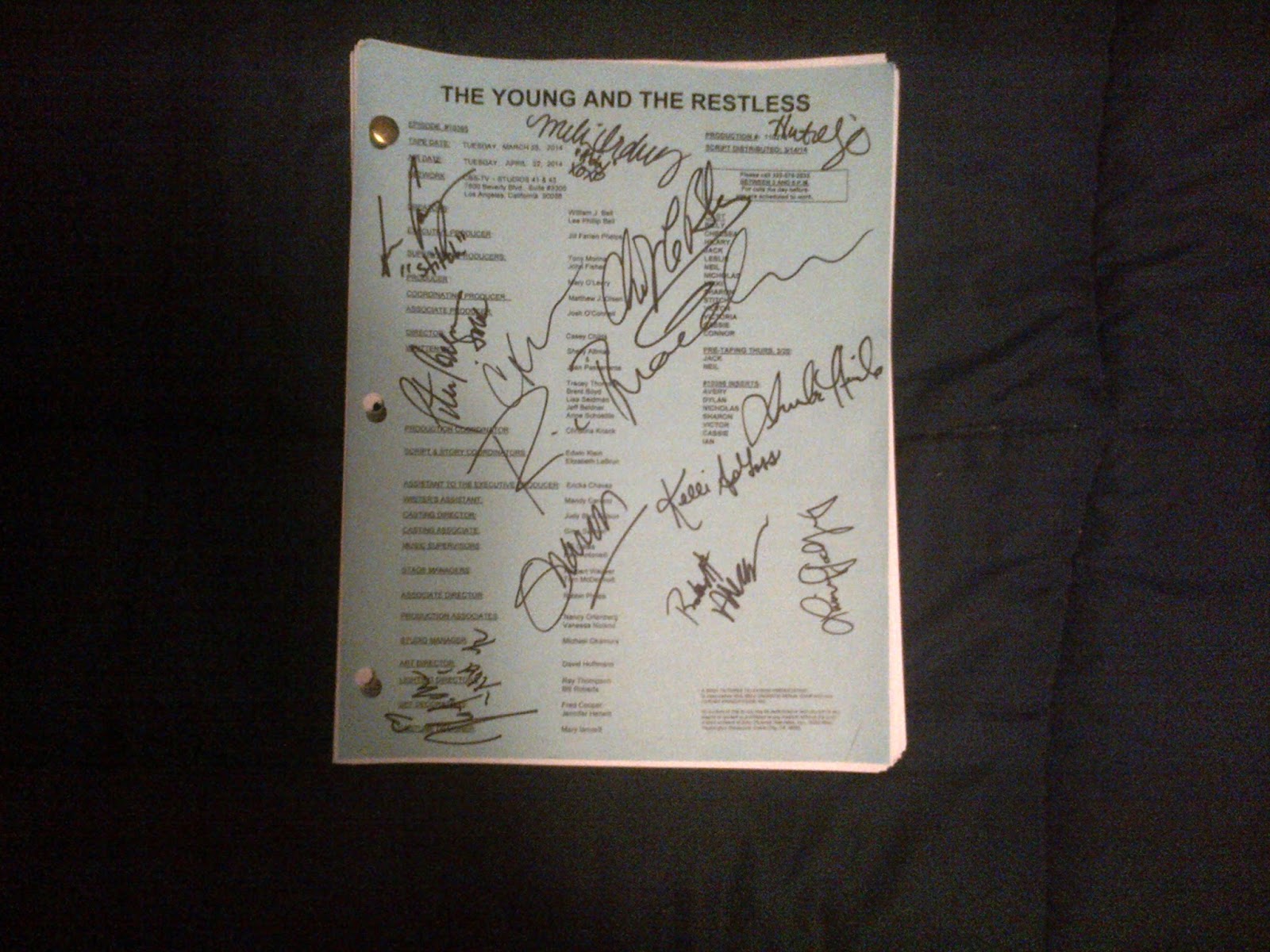 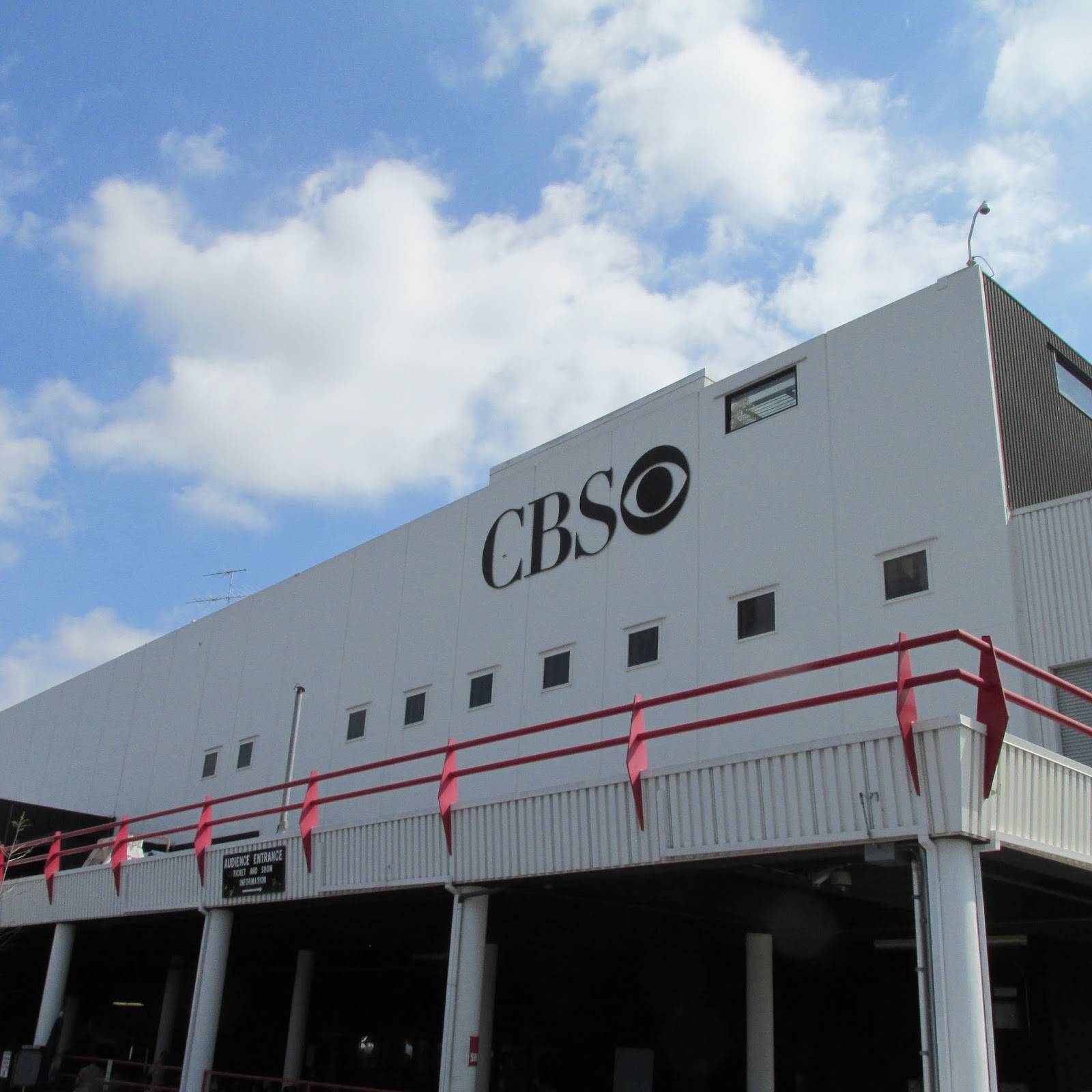 Now that the official blurb for CROSSING THE ICE has been released, I think I should share another peek at the story! Here's a little Courtney and Josh moment :) 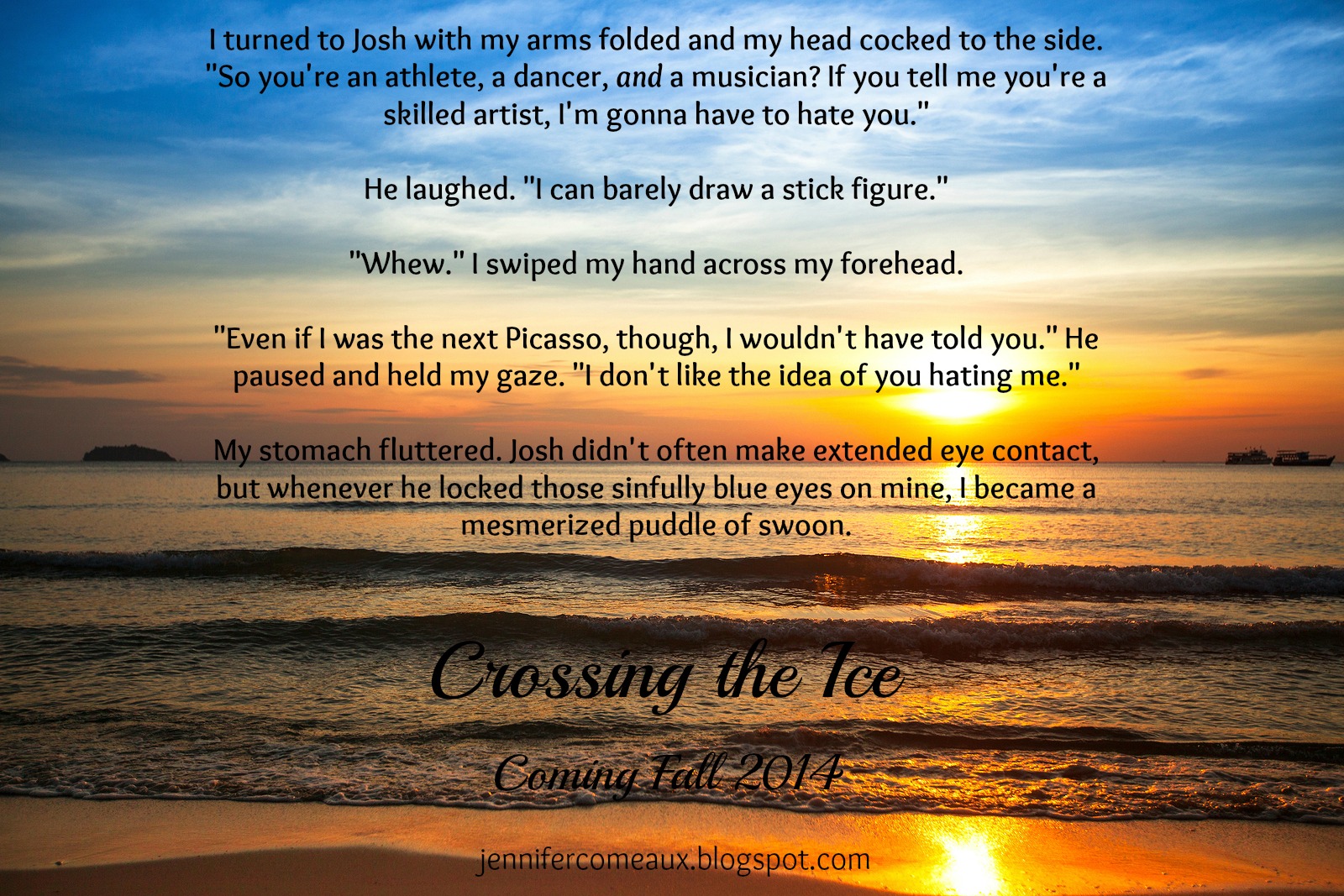 So I haven't posted any CROSSING THE ICE news in a while because I've been busy, busy, busy writing! But since the cover is now in progress (YAY!), I thought it was time I put out the official blurb. I'm soooo excited about this story, and I hope you'll fall in love with Courtney and Josh just as much as I have! It's been so much fun getting to know these characters. So without further ado, here's the blurb! 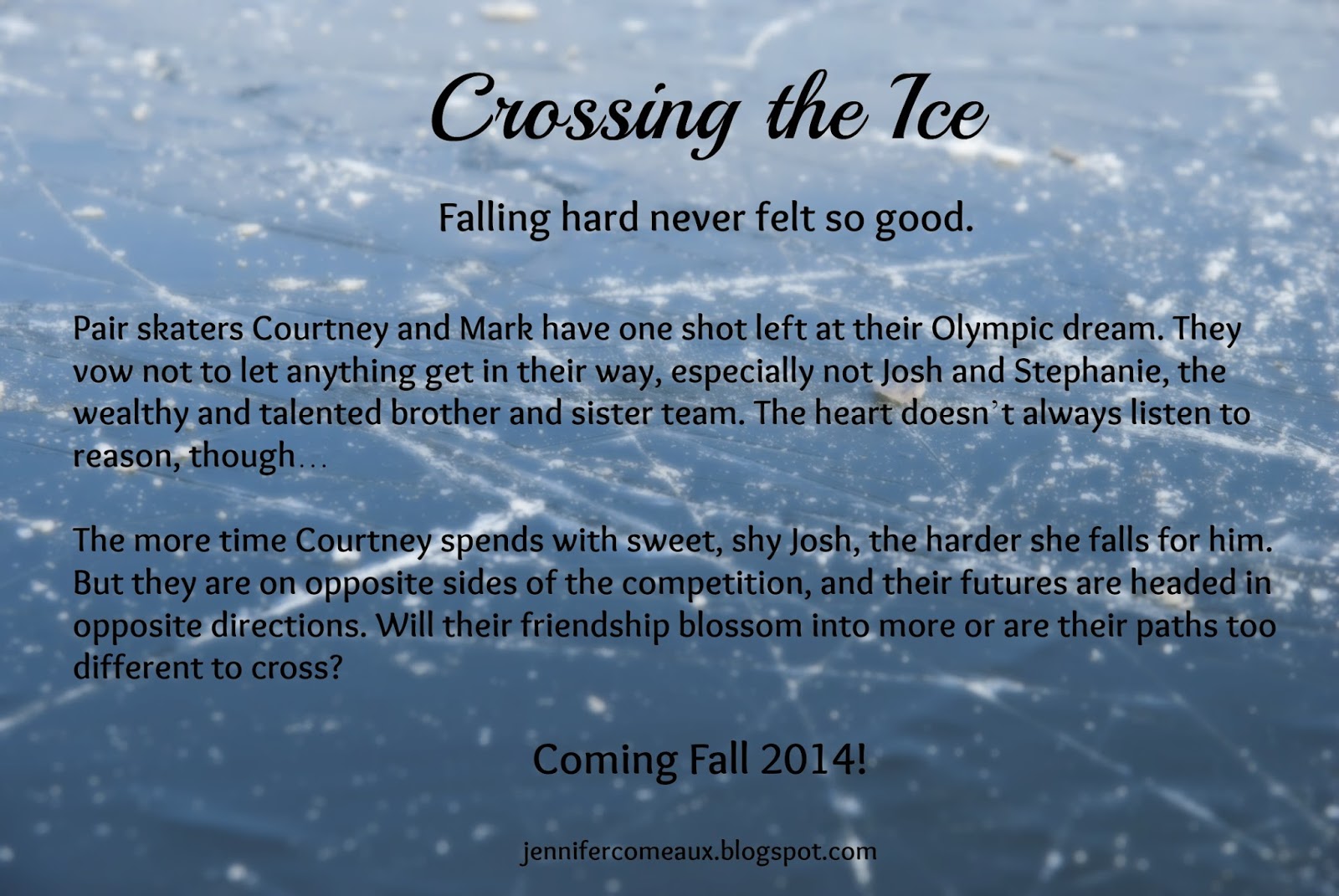 Posted by Jennifer at 1:01 PM No comments:

Welcome to another Monday Moves! Today I'm featuring a move by one of my favorite young pairs, a team I think will definitely be making waves this next Olympic cycle - Tarah Kayne and Daniel O'Shea. They have the technical ability and the intangible fire to be a force on the world scene, and I'm so excited to see what the future holds for them! Their programs are loaded with interesting transitions, and one of the moves I loved in their Dox Quixote program this year was when they did spirals as a transition into the throw triple loop. Gorgeous!

Posted by Jennifer at 4:12 PM No comments: