Want the first look at sneak peeks of my upcoming books? How about exclusive giveaways? Then sign up for my monthly newsletter! The November issue will be going out soon and will have an excerpt from LOSING THE ICE!

Sign up here! => Newsletter
Posted by Jennifer at 2:11 PM No comments: 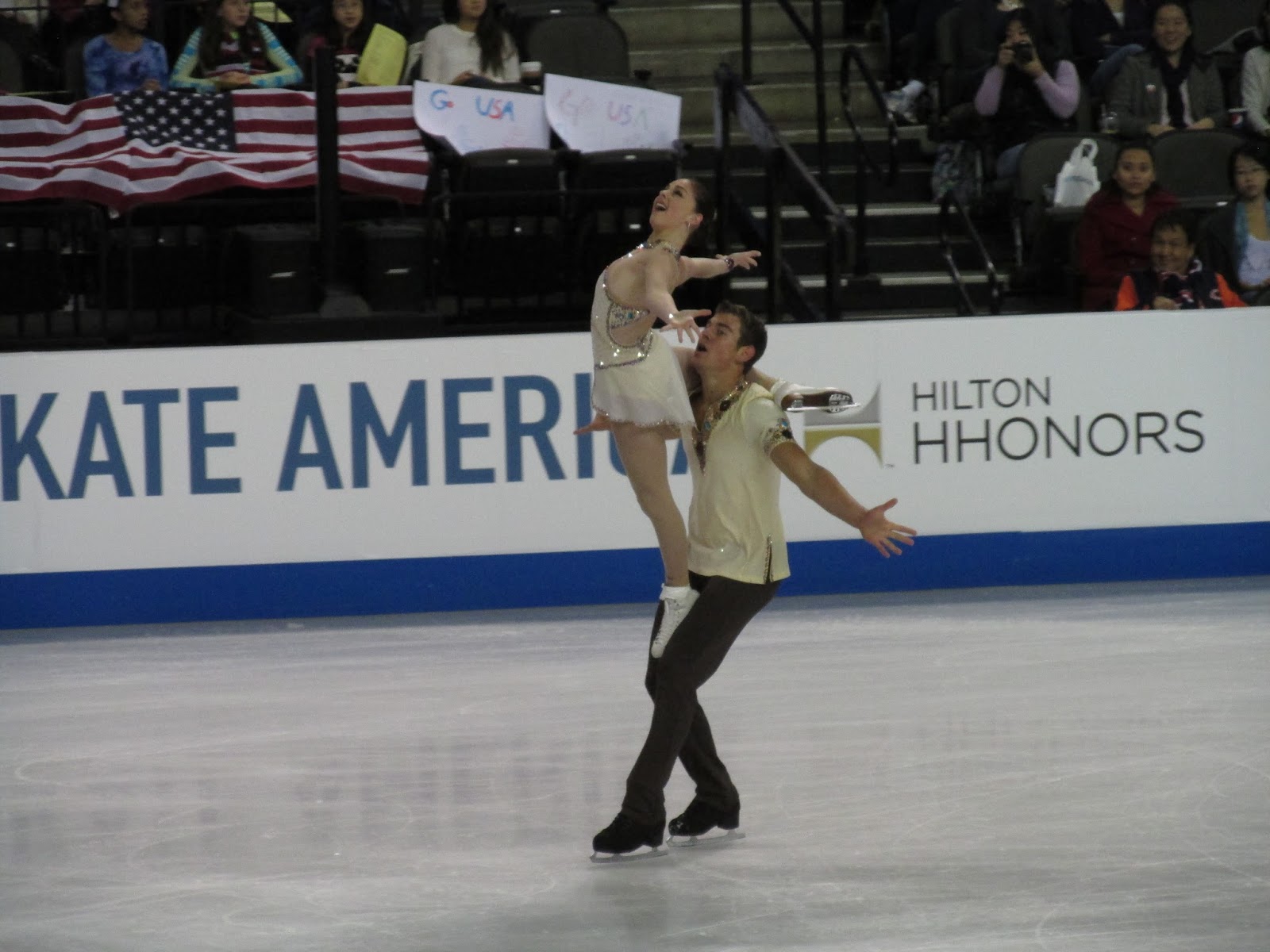 Sunday morning started off with an awesomely fun Friends of Figure Skating breakfast. We watched a beautiful video looking back at Team USA's time in Sochi, and then Jeremy Abbott and Jason Brown spoke as the Olympic veteran and the Olympic newbie. After the speeches, we got to mingle with all three Team USA ice dance teams and all three Team USA men's competitors. It was a wonderful relaxed event that wasn't too crowded, so we had lots of time to chat with our favorite skaters.

The highlight on the ice for me on Sunday was Haven Denney and Brandon Frazier's Lion King free skate. It's rare that a performance at Skate America gets me emotional (that kind of response usually comes later in the season at Nationals), but this performance was one that did. Haven and Brandon lit up the arena as the program kept building and building to an exuberant finish. I'm excited to think how great this program can be by Nationals.

There were a few performances at the exhibition that I adored - Denis Ten's program to "Mi Mancherai" and Jeremy Abbott's program to "Latch" were two of them. It was a very entertaining gala overall, especially with programs like Elena Radionova's ode to The Bodyguard. 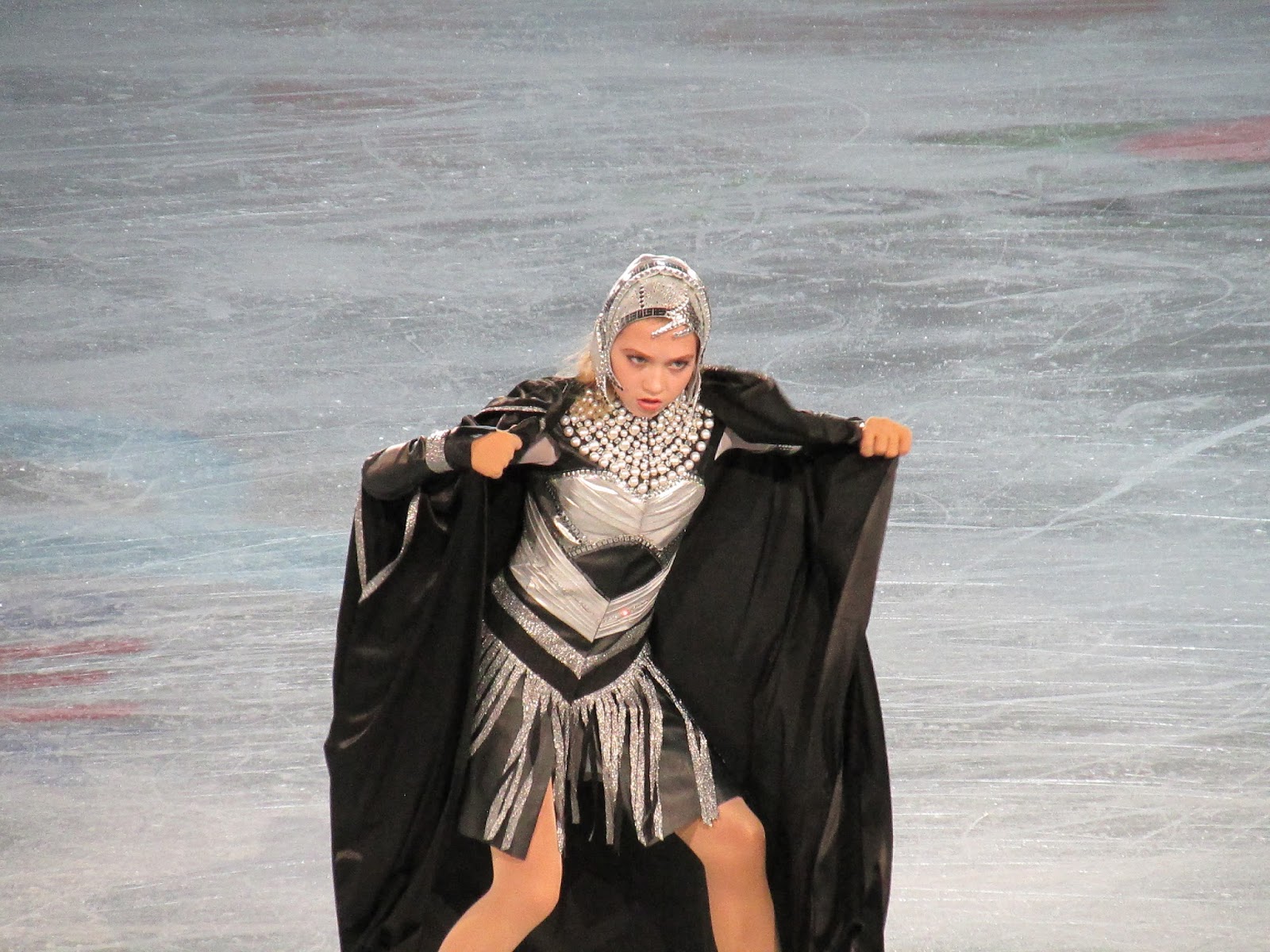 Here's the link to all my Sunday photos (Friends of Figure Skating Breakfast, Pairs and Ladies FS, and Exhibition): SUNDAY PHOTOS 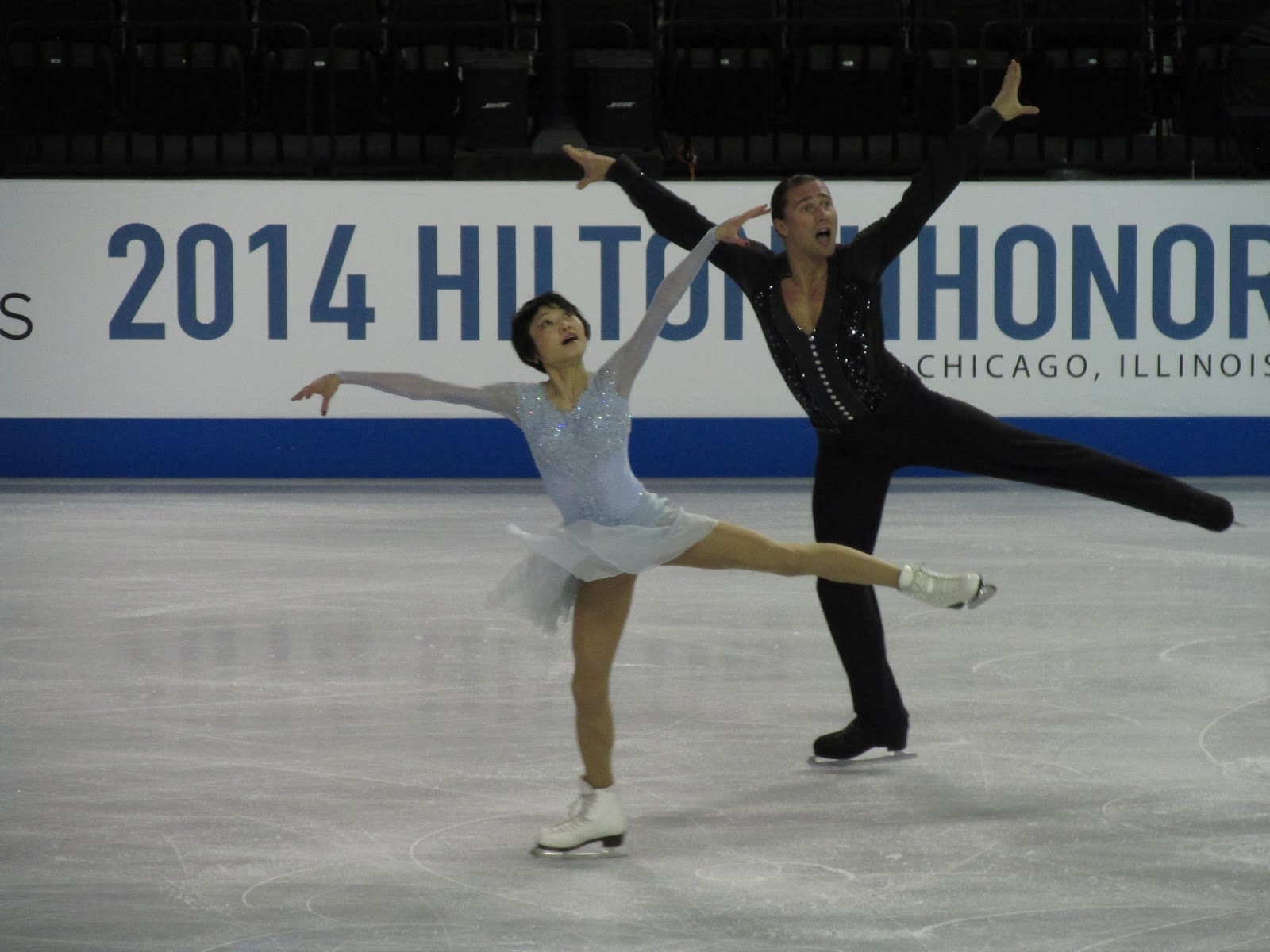 It's really late as I'm writing this, so I'll sum up today's action quickly:

Here's the link to my photos from Saturday's events: SATURDAY PHOTOS 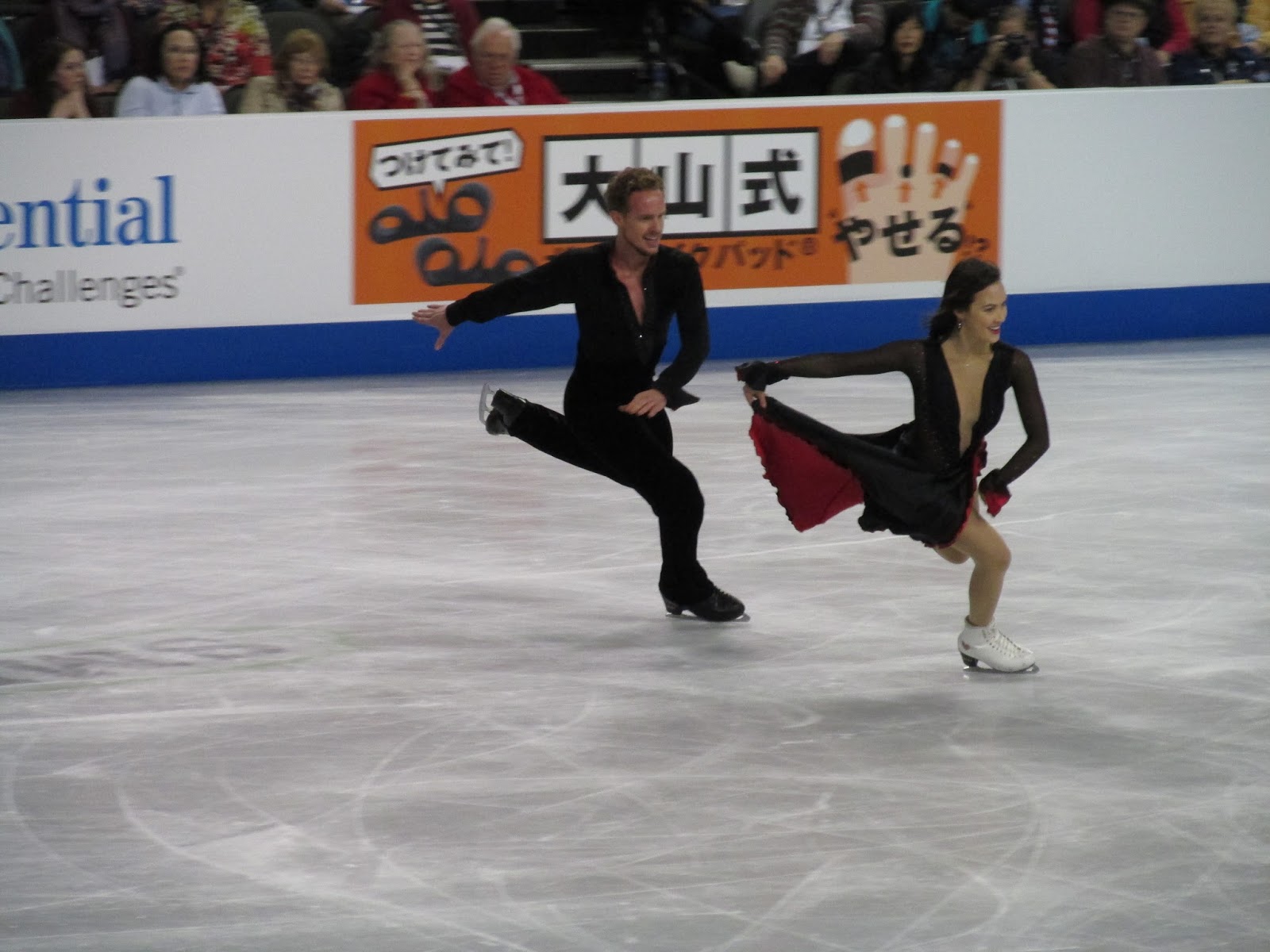 The short dance started off the night on a great note with all the teams skating well for the most part. The fight for the bronze medal will be intense with teams three through eight all closely bunched in the score column. My favorite program of the night was Madison Chock and Evan Bates' Don Quixote. They had great command of the ice, and I loved how Madi's skirt moved with the music. It was also lovely to see Fabian Bourzat at the boards with them :) 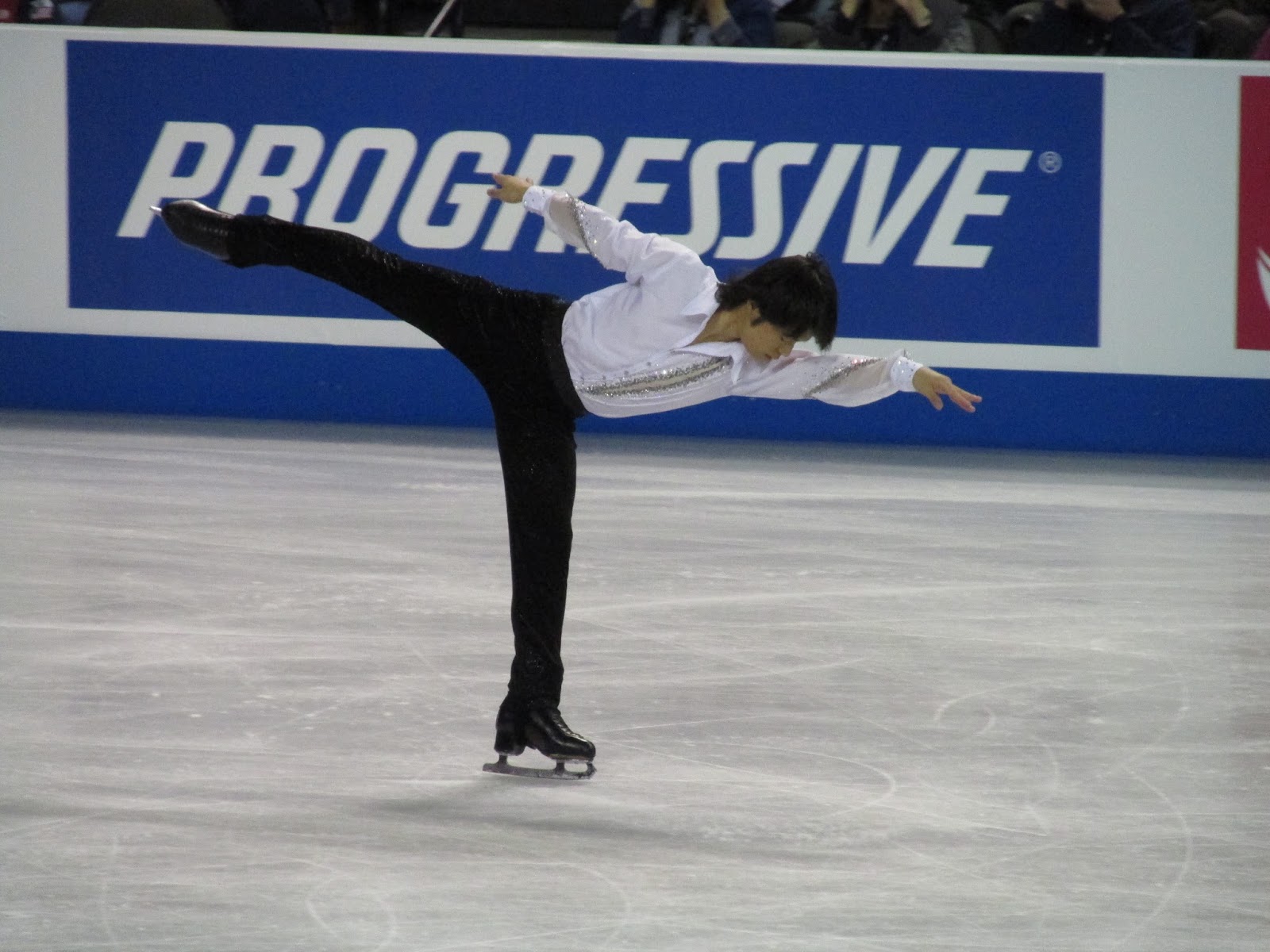 The men didn't fare as well. It was a messy night of skating, but Tatsuki Machida threw down a clean, lyrical short program that deservedly put him well ahead of the rest of the field. I thought Jeremy Abbott's Sam Smith program is one of the better ones with lyrics. He always rocks the footwork sequences, and the one in this program was no different. I'm not a fan of Jason Brown's music or the choreography of his short program, but he knows how to sell it like it's nobody's business.

You can find all my photos from the short dance and men's short program here: FRIDAY PHOTOS

I skipped the Friday practices to go downtown to watch the filming of Chicago Fire. It was so fun to see some of my favorite actors from the show filming outside the firehouse! I even got a photo with one of them, Edwin Hodge who plays Rick Newhouse on the show. 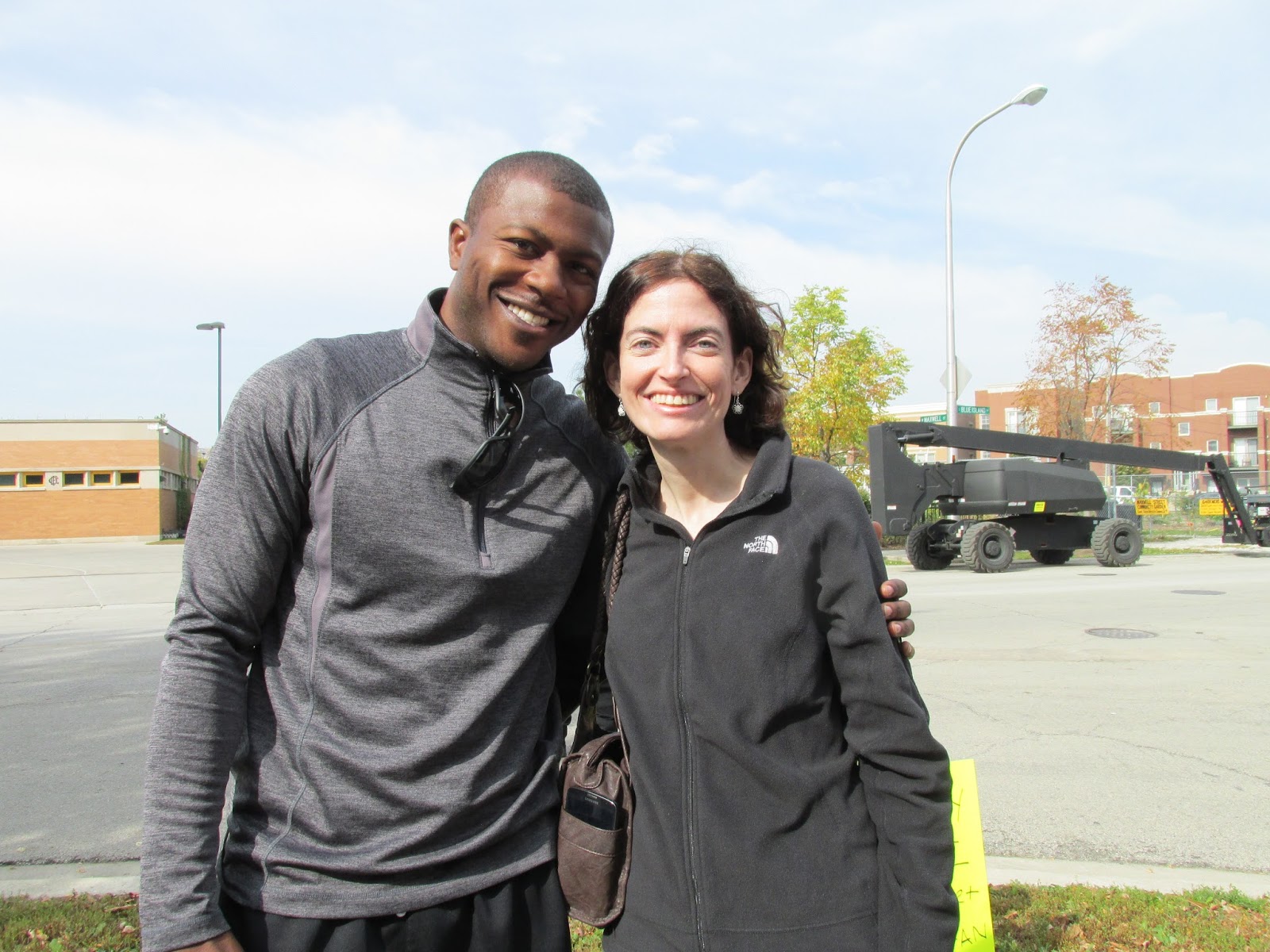 If you're a fan of the show, you can find the rest of my photos from the filming here: CHICAGO FIRE PHOTOS 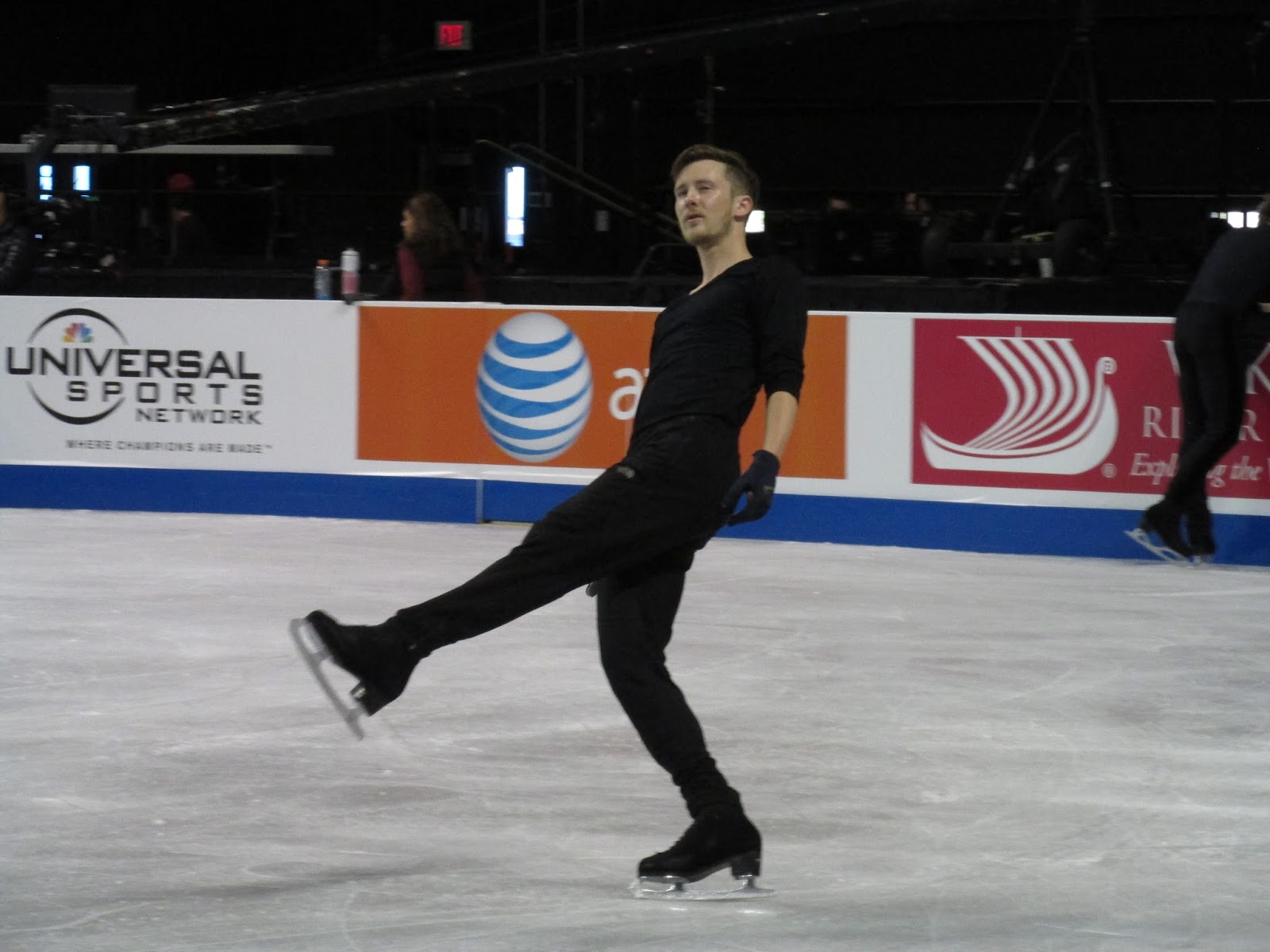 Hello from Hoffman Estates, Illinois! I can't believe this is the 10th anniversary of my first Skate America. That was an unforgettable event in Pittsburgh where I had the unfortunate experience of seeing Tatiana Totmianina's horrific fall. There were lots of great memories, too, like watching Alissa Czisny have a wonderful Grand Prix debut. But enough reminiscing - let's talk about this year's event!

I love being at the arena for the very first practice of the competition. The morning started with the men, and the first group had two of the big contenders, Tatsuki Machida and Denis Ten. I hadn't seen either of their long programs yet this season, and I was super impressed by both. Great attention to detail in the choreography and wonderful musicality. They really showed they were in a different class. 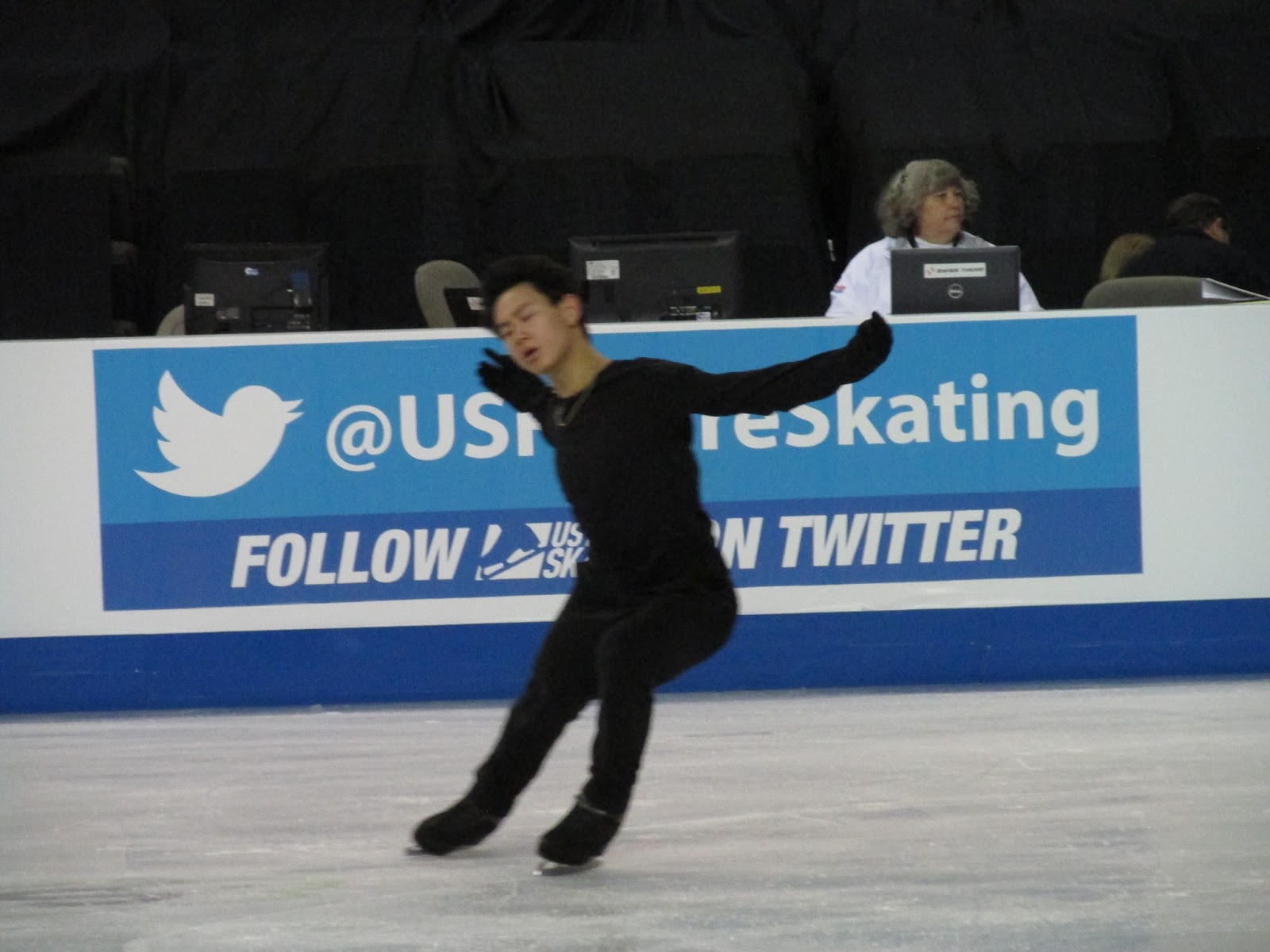 The American men were in the second group, and I was so excited to see Jeremy Abbott do a partial run-through of his Adagio long program. It's one of my favorite pieces of music, and I knew he would do it justice. Check out the three sections of his run-through: Part I, Part II, and Part III.

Jason Brown did a full run-through of his long program and was rock solid with only one fall on a Lutz. See a portion of his run-through here. He had really good speed, and I loved the way the program built all the way to the end. The music is very powerful. 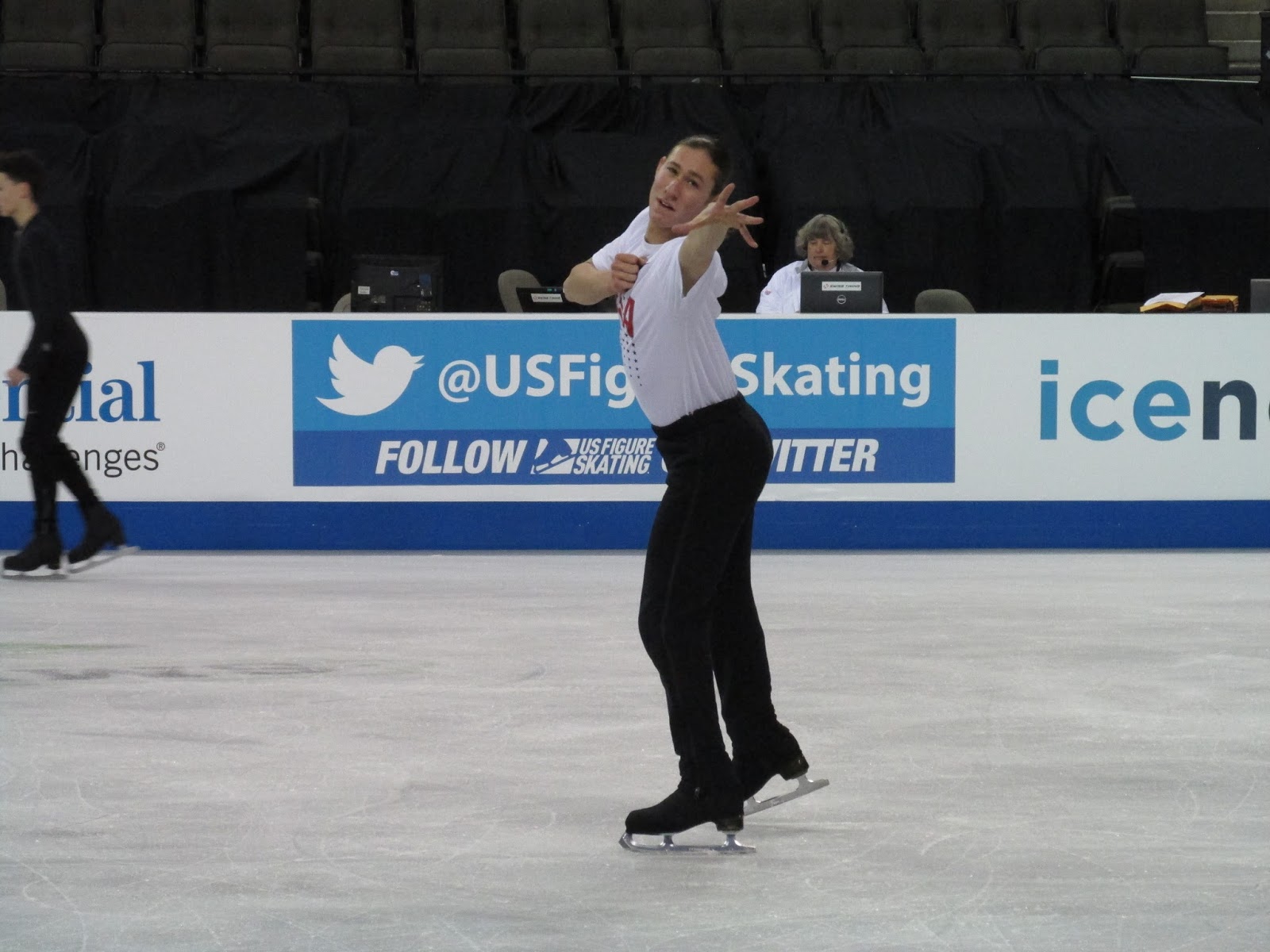 The ice dancers were up next, and I was struck by the height of Stepanova and Bukin. They looked eight feet tall next to the other couples. They have such gorgeous lines, and I loved their twizzles where they did one set very low to the ice. I can see this team being the next Russian powerhouse. 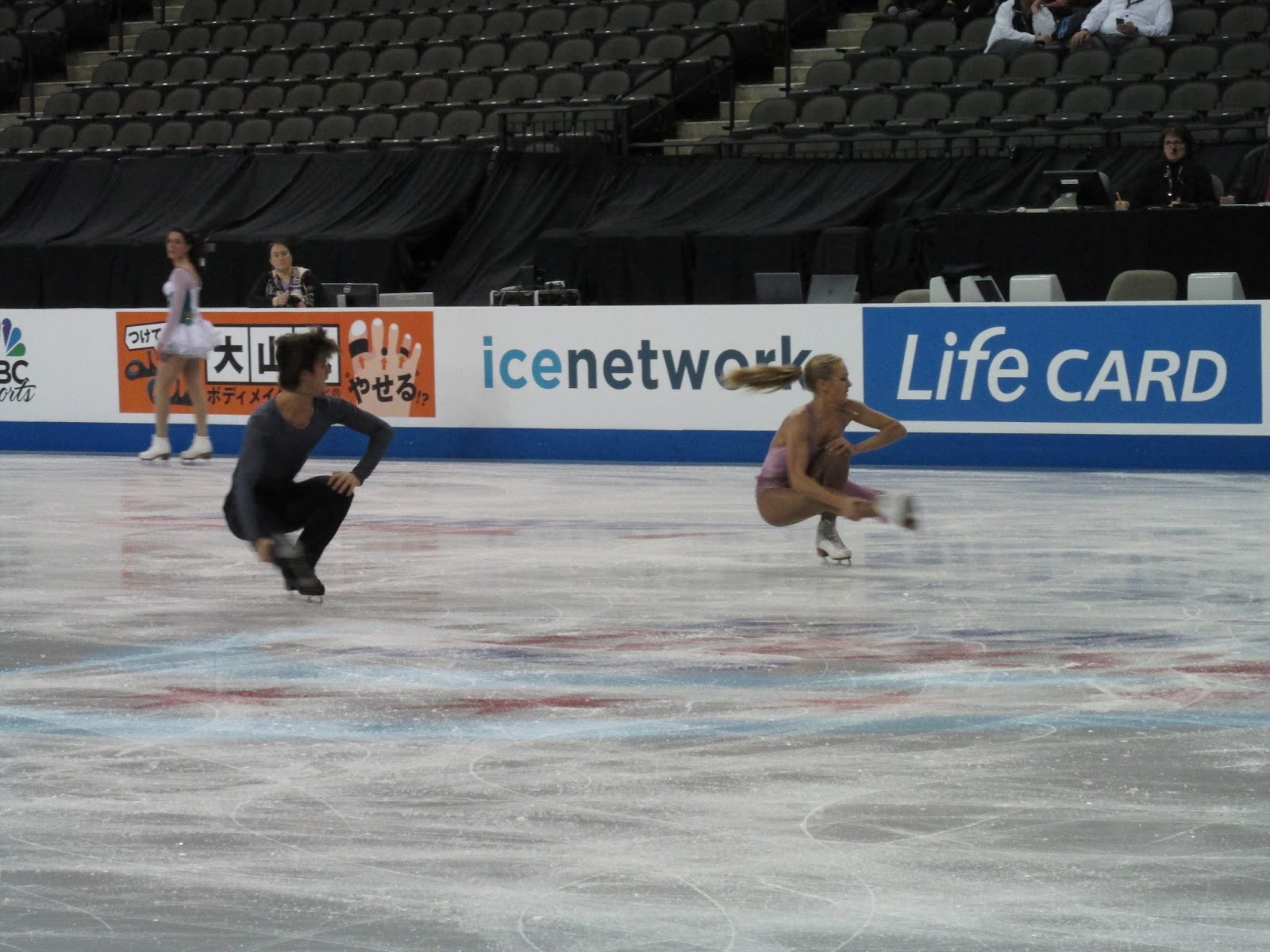 The last group featured the three American teams. I love Anastasia Cannuscio and Colin McManus' Danse Macabre free dance. Its my favorite free dance of theirs. They looked fast and smooth. Alex and Maia Shibutani looked ready to fight for the top spot with their Paso Doble run-through. Very intense. Also on top of their game were Madison Chock and Evan Bates. They gave so much personality to their An American in Paris free dance and were flying across the ice.

Here's the link to all my photos from Thursday's men's and dance practices: THURSDAY PHOTOS

This week Daisuke Takahashi announced his retirement from competitive figure skating, and it got me thinking about all the incredible performances he gave over the past ten years. He had a way of skating to the music and connecting to the audience unlike any other in his generation. I was so blessed to have seen him skate live a number of times during his career. I'll never forget the first time I saw him live - Skate America in 2007. We were all screaming like 16-year old fangirls during his hip-hop Swan Lake short program:

Another short program of his I loved was his Latin one. When I saw him perform it at Skate America in 2010 his jumps were a little sketchy, but his footwork and connection with the crowd were off the charts as usual:

I loathed the music "Blues For Klook," but when Daisuke skated to it for his long program in 2011-2012, I was in love with it. The dude just oozed across the ice in this program, and my favorite performance was the one he gave us at the Grand Prix Final in Quebec City:

My favorite of all his performances, though, was the exhibition he did at the 2012 Four Continents Championships. I was so lucky to be in the front row at that event, and I was moved to tears by the simple, quiet elegance of his performance to "The Crisis" by Ennio Morricone. I could feel the emotion he put into every step:

I'm so sad that we won't be seeing Daisuke on the competitive circuit anymore, but I hope we'll still see him skating for years to come because he is a true artist. He's given me so many wonderful memories and one rather amusing one - at the 2011 GPF in Quebec, my luggage got mixed up with the luggage of Daisuke's entourage at the airport, and my suitcase ended up flying to Tokyo! It wasn't too funny at the time, but since the suitcase was eventually returned to me a week later, I can laugh about it now :)

Thank you for being such a wonderful skater and sportsman, Daisuke!!
Posted by Jennifer at 4:56 PM 2 comments:

After a long period of brainstorming and deliberation, I've finally decided on the title for the next book in the ICE series! The novella sequel to CROSSING THE ICE is... drumroll, please... LOSING THE ICE. And here's what it's all about!

Courtney and Josh are in love and excited to finally compete as skating partners. When they take the ice for their first competition, they want to show everyone, especially Josh's family, they are the perfect pair. But ice is slippery, and one misstep puts all their dreams in jeopardy. Now they must show each other both their love and their partnership are strong enough to survive.

Are you ready for more of Courtney and Josh's story?! The book will be out next spring. In the meantime, check out the bonus epilogue to CROSSING THE ICE if you haven't already!
Posted by Jennifer at 3:07 PM 2 comments: